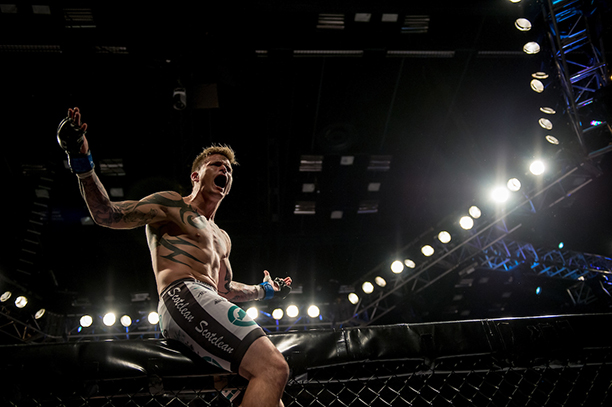 Cape Town, South Africa – In a surprise move EFC and MMA stalwart Wesley ‘Young Assasin’ Hawkey has made the drop to bantamweight weight. The multiple time contender at featherweight is now set to face a former adversary in the lighter division, he is scheduled to fight Francois ‘Franaconda’ Groenewald.

Hawkey has fought the best and has even given bantamweight champion Demarte Pena arguably his biggest challenge yet. Known for his incredible boxing pedigree, Hawkey has shown a vast maturity in recent bouts with his wrestling and submission skills. Since his move to Team MMA Fighter under Morne Swanepoel he has become a more rounded athlete. Always the smaller man in the featherweight division, Hawkey will now have the size and power advantage over his opponents.

However, Groenewald is a known Brazilian Jiu Jitsu specialist, a well-known blackbelt in the deadly art. Completely adept at sinking in submissions, he has won all but one of his fights thusly. These two have met before, prior to signing with EFC, which resulted in Groenewald submitting Hawkey with an armbar.

Hawkey has been outspoken about another shot at the championship, “Unfortunately for Franna he is the last piece to my puzzle in my pursuit of EFC gold. My hand will be raised in Cape Town and I will be the number one bantamweight contender.”

Has Hawkey fixed his holes truly, or will Groenewald expose him again, but this time, in front of millions of fans?