PRIDE ON THE LINE 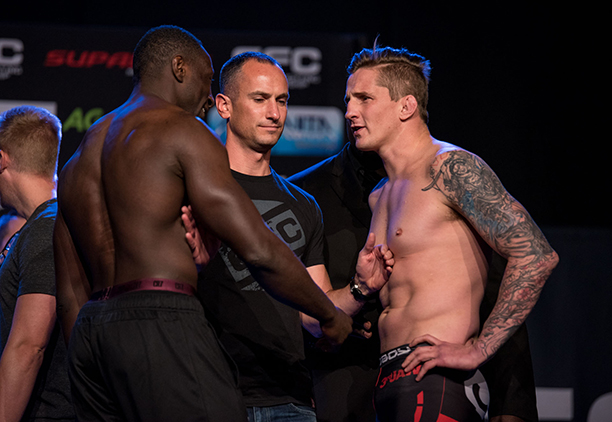 Johannesburg, South Africa – Carnival City’s Mardi Gras Theatre played host to a heavily biased crowd for the EFC 53: UK vs RSA weigh-in this afternoon. Two of the world’s greatest sporting countries are set to collide inside the Hexagon, with national pride at stake.

Reigning middleweight champion and UK native Yannick ‘Black Mamba’ Bahati took to the scale to boos and jeers from the crowd, who made their support for Bahati’s local opponent known in no uncertain terms. He faces South African Michiel Opperman in the main event of the evening, Opperman himself a former welterweight champion. The man from Pretoria enters the Hexagon tomorrow night as the underdog, but seemed quietly confident as he stepped onto the scale. An intense stare-down and verbal exchange took place when the two athletes stood face-to-face.

Self-assured as ever, Bahati’s message was simple and blatant when interviewed, “I’m not just the best middleweight. I am the best athlete in EFC. Mr. Opperman is going to sleep.” Opperman ignored the verbal threat from Bahati and called for a rally of support from the fans. “Come out and support tomorrow night. It is going to be insane.”

Fan favourite Boyd Allen is set to face Wales’ Azi ’One Bomb’ Thomas in the penultimate bout of the evening. Allen is renowned amongst MMA fans for his cool, calm and collected boxing style. Similarly, Thomas has represented his country in the Commonwealth Games for boxing. Potentially two of the best boxers in MMA, are on an inevitable collision course. While Allen was his usual stoic self on stage, Thomas took to throwing verbal lashings at Allen.

In what is widely tipped as a favourite for ‘Fight of the Night’, former featherweight champion Danny Henry of Scotland faces the ever exciting Wade Groth from South Africa. These are two men are vying to return to the top of the division for another shot at EFC gold. Both have consistently delivered bonus-winning performances in the past with their slick striking and speed.

With two of the organisation’s biggest finishers set to go head-to-head, it’s hard to imagine the only heavyweight fight on the card going the distance. South Africa’s former champion Andrew ‘One Gear’ van Zyl and England’s undefeated Tony ‘Oosh’ Mustard are both known for their heavy hands and more than capable ground games. Will home ground advantage come into play for van Zyl or will Mustard’s KO power deliver a dream EFC debut?

The main card will be opened by the ever entertaining Tumisang ‘The President’ Madiba, who looks to continue his incredible form of late and win his third fight in three months when he faces the undefeated Mamoudou Toure from Senegal.

The full EFC 53 weigh-in results were as follows: