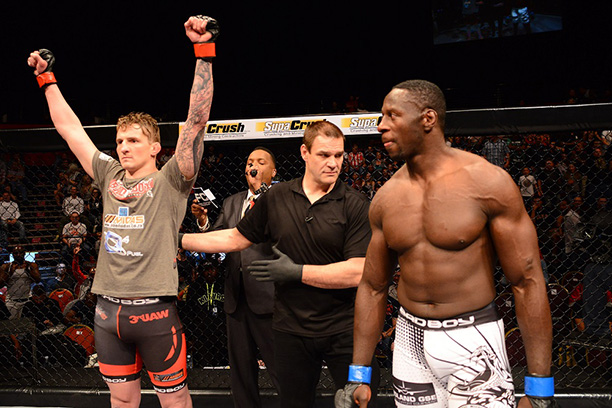 Johannesburg, South Africa – The South Africans prevailed in a night that was dominated by sublime knockouts at EFC 53 hosted in the Big Top Arena at Carnival City. It took all of twelve seconds for Michiel Opperman to dispose of Yannick Bahati, leaving the middleweight champion floored with a deadly uppercut. Coming into the bout, Bahati had claimed that Opperman was nothing more than a journeyman of the EFC. He lived to regret those words, as Opperman seemed determined to defend his reputation in spectacular fashion.

In stark contrast to the main event, the co-main event had almost everything. Boyd Allen and Welsh newcomer Azi Thomas dished up an emotionally charged fight that kept the parochial crowd on the edge of their seats. ‘Sneaky Boyd’, as he is affectionately referred to by his camp, methodically picked off his opponent with a remarkable striking display in the first two rounds, until he was stunned by Thomas late in the second. Clearly rocked, it was a matter of survival until the break, which included Allen escaping what looked like a tight guillotine. After the break, Allen came out revitalised and targeted a heavily bleeding Thomas with uninterrupted punches. Thomas was visibly uncomfortable and reached a point where he could no longer defend himself, forcing referee Bobby Karagiannidis to step in and call it.

Sandwiched in the middle of the main card, the featherweight bout between Danny Henry and Wade Groth had widely been tipped as a potential barn burner, pitting two of the organisation’s most exciting athletes against each other. Both athletes looked in great form after a highly technical and closely contested first round. Early in the second however, former champion Henry stunned Groth with a sublime head kick and right cross combination that sent the Johannesburg native to the floor. Henry quickly capitalised and finished his opponent off, claiming the only victory on the night for the UK contingent.

The Scotsman has put himself firmly in contention for a rematch with champion Igeu Kabesa, who took the belt off Henry at EFC 47. Two-time heavyweight champion Andrew ‘One Gear’ van Zyl is a veteran of the EFC hexagon and his experience proved too much for UK debutant Tony Mustard. Coming into the bout as a renowned KO specialist, Mustard was outclassed by van Zyl early in the first round. After a messy initial exchange, van Zyl managed a massive takedown and assumed mount. From there it was a matter of time as the South African rained down elbows and fists on his opponent, resulting in a TKO stoppage by referee Ferdi Basson.

Van Zyl now has his sights firmly set on another title shot against the winner of the upcoming title fight between champion Danie van Heerden and Elvis Moyo at EFC 54 in October.

In the opening bout on the main card, Tumisang Madiba continued his sensational run of form with a swift first round submission of Mamadou Toure. After an early exchange in the clinch, Madiba worked his way quickly onto Toure’s back and sunk in a deep choke. With this win, Madiba has solidified his credentials as a contender in the highly competitive featherweight division.

Up next is EFC 54: Van Heerden vs Moyo, Lino vs Power, Buys vs Mdlalose is presented by SUPABETS, and takes place on Saturday 15 October 2016 at Sun City, North West. Tickets are on sale now at www.computicket.com, and the 5 main card bouts will be broadcast live on kwesesports.com (Sub-Saharan Africa) and Kwesé Free Sports (Kenya) starting at 20:00 (CAT) and broadcast on Friday 21 October on e.tv (South Africa) after the 20:30 (CAT) movie. Full broadcast details available on www.efcworldwide.com.