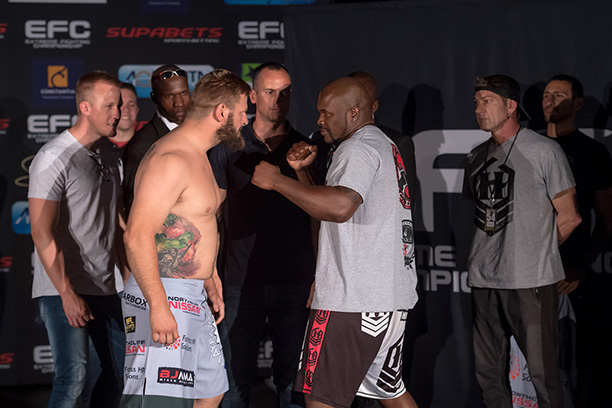 Sun City, South Africa – EFC 54 will see two men seek vengeance on their way to becoming champions in front of a sold out arena tomorrow night. Earlier this afternoon, the official weigh-in took place at the Sun Park at Sun City Resort.

The main event of the evening will see former two-time heavyweight champion Andrew ‘One Gear’ van Zyl face a former adversary in Zimbabwe’s Elvis ‘Bomber’ Moyo. Van Zyl has beaten his opponent once previously, over two years ago. However, a much improved Moyo has promised he will claim the belt tomorrow night with a knockout.

Exuding confidence in his interview, the contender Moyo simply stated, “To become champion.” When asked what fans can expect tomorrow night, van Zyl was slightly more verbose in his response, “I came off a six-week camp and took a week off after my last fight. That was just a small speedbump and now I am ready.” In what was meant to be a historic co-main event that would see the first EFC women’s flyweight title to be contested, the women’s flyweight title fight has been cancelled. Shana Power was unable to make the flyweight limit and was deemed medically unfit by event doctors to compete. The fight card will subsequently move up one position with Michael Vermeulen vs Tomasz Kowalkowski set to open the main card.

In the new co-main event of the evening, JP Buys seeks vengeance for his only ever professional loss against Baldwin Mdlalose, and to claim the interim flyweight title in the process. Buys, was his usual assured self in his interview, “You can expect me to come out and do what I need to do to take the belt back to FFM.” Mdlalose simply promised an exciting fight befitting to the Sun City destination, “You can expect fireworks!”

In a highly anticipated return to EFC, Ireland’s Henry ‘Herculeez’ Fadipe makes his long awaited return to the EFC Hexagon to take on DRC’s Bruno ‘Major’ Mukulu. Fadipe, a former welterweight champion, is adamant of reclaiming his belt and a victory over the tenacious Mukulu is a step in the right direction. In a show of complete disregard for his opponent, Fadipe opted to show his back to Mukulu as they faced-off.

Rising heavyweight star, Wessel ‘Wess Express’ Mostert is set to make his third appearance in the Hexagon, and for the first time in front of his home town crowd. He faces a dangerous adversary in the behemoth Cameroonian Nico ‘The Lion’ Yamdjie. Both men are renowned for their heavy-laden fists and after a scuffle on stage at the weigh-in, it would be foolish to bet against a knockout bringing this fight to an end.

Now set to open the main card with a bang, sees South Africa’s Michael Vermeulen take on the tallest man in the organisation, Poland’s Tomasz ‘Kredka’ Kowalkowski. Much is on the line in this bout, as Vermeulen is looking for his fourth straight win and Kowalkowski is desperate to get back into the win column. Two further athletes failed to make weight, Anicet Kanyeba and Henry Fadipe. Kanyeba opted for a financial penalty.