WHEN THE MIC STOPPED RECORDING

Sayed reveals what was said during their face-off 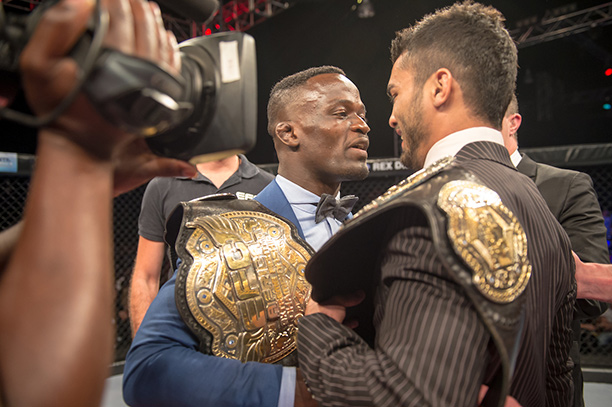 Cape Town, South Africa – Ever since the interim champion Irshaad Sayed joined the EFC organisation the tension between him and the long time reigning champion Demarte Pena has escalated. At EFC 54 in Sun City the two faced-off in the Hexagon, but what was said when the microphones were not recording was unknown to the world, until now. The build-up to this fight is without a doubt living up to what it is being dubbed as… the biggest in EFC History!

It is often thought that animosity between opponents is put on for the cameras and is done to sell a fight, but recently, what the interim champion Sayed posted on social media explaining his view of what happened when the mics were turned off, makes it clear that selling a fight is not the intention.

Sayed on Facebook – “This self-righteous hypocrite called me uneducated and tasteless a few weeks back for using vulgar language but as soon as the mic was gone he whips out the F bombs. ‘I’m going to f…ing kill you’ he says to me, that’s why I’m smiling. It was simply fight promotion and business for me up to this point. I thought he was actually a decent guy, well educated, well spoken but actually he is a damn fraud. I’m going to lay a beating on this fool.”