‘FANGZ’ LOOKING TO SINK HIS TEETH IN GROENEWALD 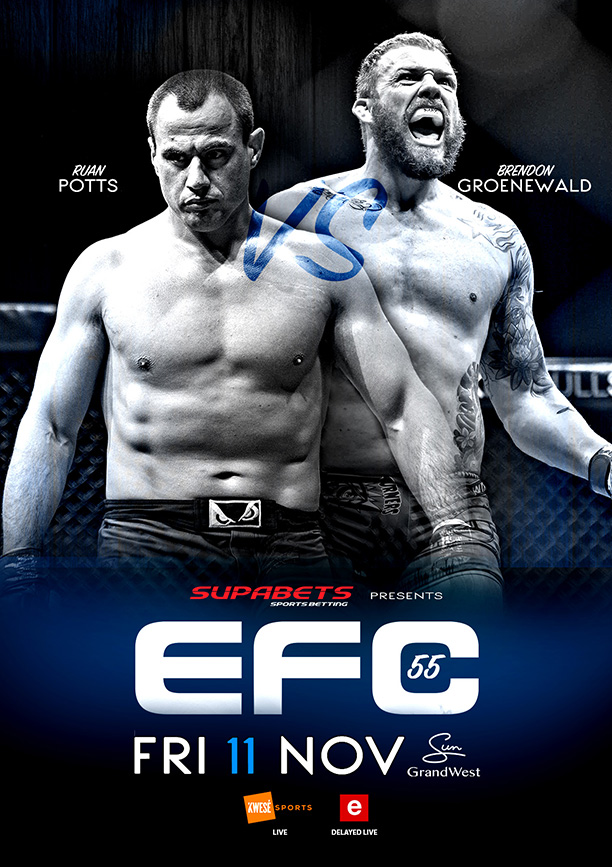 Cape Town, South Africa – Two former heavyweight champions are set to clash on the main card at EFC 55 in Cape Town. Johannesburg’s Ruan ‘Fangz’ Potts will take-on Cape Town’s Brendon Groenewald at GrandWest next week. Both men have been on top of the heavyweight totem men are ambitious to return.

Fighting out of House of Tinkerbell gym in Springs, Potts was at one point the most dominant heavyweight EFC had ever seen. After competing in Las Vegas based promotion UFC, Potts returned to the Hexagon with his first ever losing streak in his career. A losing streak that was ended severely at EFC 50 with his devastating armbar finish over Vandam Mbuyi.

“Looking forward to fighting someone of such a high caliber. It is going to be a war when two former champs come head-to-head. I’m going to leave it all in the Hexagon,” commented Potts.

Groenewald is a formidable foe, a man that is often underestimated by his opponents. He surprises them with his slick Brazilian Jiu-Jitsu skills and heavy laden punches. He is known for his very laid back attitude and seemingly nonchalant ways. Groenewald captured EFC gold, when Potts vacated the title and so the two have never faced each other before. When asked for his thoughts on his upcoming fight, Groenewald responded in his typical candid way, “You know, it’s all about having fun at the end of the day.

This fight takes place on the main card at EFC 55 in Cape Town. Just ahead of the bantamweight unification title fight between Demarte Pena and Irshaad Sayed.