“LET HIM BRING WHAT HE WANTS” 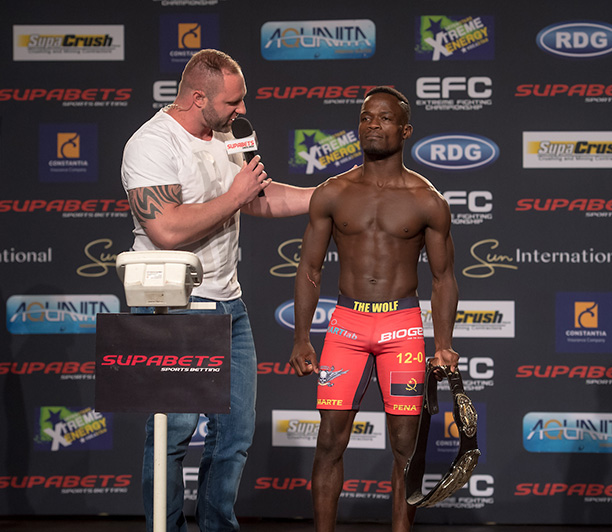 Pena (11-0) aims to defend his bantamweight strap for a third time at GrandWest Arena, having previously protected the featherweight crown five times before dropping down a division.

In his way stands a bullish Sayed (12-2), who is unbeaten in five bouts in the promotion and picked up the interim belt with an exciting third-round TKO of Cedric Doyle in April.

Sayed has questioned Pena’s ability to finish opponents, dismissing his fighting style as “laying and praying”.

‘The Wolf’, however, insists his perfect record is no accident.
“There are a few things he did on social media that he said, that got me really upset,” said Pena, who also defeated Doyle in his last appearance in the Hexagon in July, 2015.

“But at the end of the day I’ve done this many times and I’ve won two titles, defended it seven times combined. I know I’m definitely gonna beat him so he shouldn’t be surprised after that happens.”

The Angolan added: “It’s no luck being a two-division champion, there is no luck in that. There is no luck in defending the featherweight title five times, bamtamweight twice, and now the third time. My success isn’t because of luck and I lay or pray or whatever. Just because I put in so much work, that’s why I believe I’m gonna win again. He can say what he wants, at the end of the day I know I’m a better MMA athlete than he is.”

Pena maintains staying at the top is a different animal to making a run at the title.

“If I was a contender fighting to become a champion, I would try and put out great shows and whatever. But when you are a champion for long time it is hard and no one understands that. That’s the biggest thing, if he brings it I will just bring it one step more. You saw with Wesley [Hawkey], he brought everything and look what happened afterwards. Let him bring what he wants. If he wants to coast he’s gonna definitely lose the fight. If he wants to come hard, he’s gonna gas and I’m gonna beat him.”