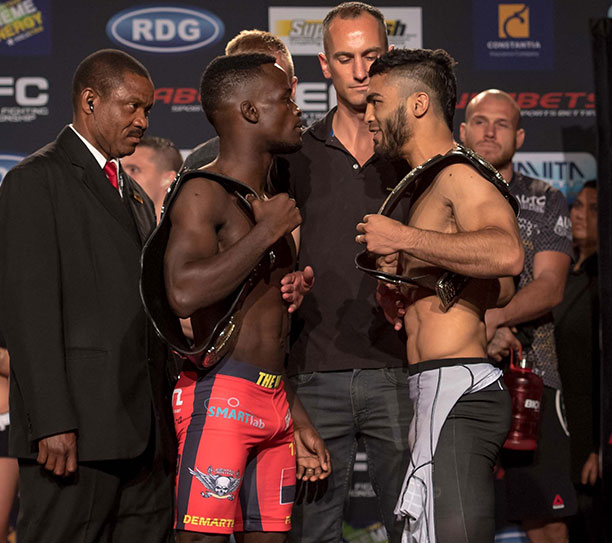 Cape Town, South Africa – On Friday 11 November the most prolific champion in EFC history, reigning bantamweight title holder Demarte ‘The Wolf’ Pena, will clash with the current interim EFC bantamweight and former world Muay Thai champion Irshaad ‘White Tiger’ Sayed. The fight has grown into the biggest in the organisation’s history. Today the two hit the scales and faced off in an unprecedented pre-fight showdown.

Hosted at the GrandWest Casino, Sayed mercilessly baited Pena, the undefeated two division champion. Sayed stunned the crowd by appearing in a Spiderman suit, and thereafter proceeded to fire string out of a compressed air container at Pena.

Emotions reached boiling point as the two then faced each other, with Sayed peeling off his mask before yelling at the stony-faced Pena.

“I fight for my life, he fights for popularity,” said a cold Pena after. “I fight to enjoy myself,” Sayed replied. “I will finish this fight.”

Pena is known for a strategic and wrestling based strategy, relying on stifling his opponents to win by decision. Sayed on the other hand thrives on a ‘risk it all’ approach. Both are motivated like never before to put a beating on the other. Fans are in for spectacle of revenge tomorrow night.

At EFC 55 the lightweight title is also on the line, when the American Dave ‘The Pain Train’ Mazany defends his belt for the first time. Originally scheduled to fight Cape Town’s Don Madge, an injury has spun the fight into a rematch between Mazany and the man he took the belt from, former dominant champion Lion ‘Iron Lion’ Mynhardt.

After successfully making weight both athletes declared their intention to give the crowd exactly what they want – a full throttle clash between two warriors that have already tested each other’s mettle and now know where to press.

“When I fight I make them fight my game,” declared the champion on the topic of the short notice change. “I’m ready to fight anybody.”

Also on the main card, rising star Cameron Pritchard takes on the legendary former welterweight champion Dino ‘The Lion’ Bagattin. Pritchard has everything to fight for, with a title fight his reward for a victory. Bagattin is supremely fired up, and the two had to be separated by security as they faced off.

All athletes made their correct weights. The official EFC 55 weigh-in results were as follows: