PENA AND MAZANY KEEP THEIR GOLD 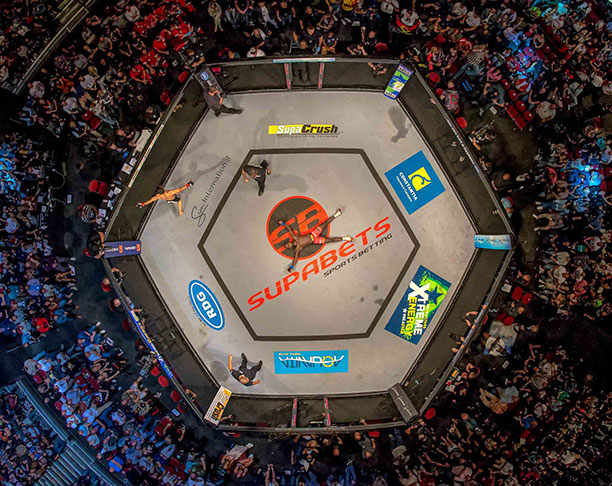 Demarte Pena lies in the centre of the Hexagon celebrating after the final bell in his title fight against Irshaad Sayed.

Cape Town, South Africa – The GrandWest Grand Arena played witness to the biggest fight in EFC history tonight. The event was sold out hours before the first fight, and by the time Demarte ‘The Wolf’ Pena and Irshaad ‘White Tiger’ Sayed took to the Hexagon to fight for the bantamweight title, the crowd was split down the middle in support. Both men fought through a grueling five rounds, the first three of which were filled with excellent striking. Pena and Sayed played a tactical standing game, landing consistently and using a dazzling array of punches, kicks and elbows. All expected Pena to take Sayed down early, but it was only in the fourth that the Angolan shot in for the first time, and began a ground assault that would push him ahead on points. The judges finally handed down a unanimous decision in favour of Pena, sparking immediate calls for a rematch from the Sayed’s support, and the ‘White Tiger’ himself.

Both landed thudding punches from the start, mesmerizing the crowd with a brutal display of mixed martial arts. Mynhardt, wary of the quick submission that lost him his title to Mazany the last time out, kept his distance and filled the space with punishing strikes, which the American happily absorbed and returned. By the third round Mynhardt was a mask of blood. Although landing consistently, he was unable to match Mazany’s outstanding skill set, and one takedown too many led to a TKO stoppage on the back of hard ground and pound.

Former heavyweight champions Ruan ‘Fangzz’ Potts and Brendon Groenewald preceded the lightweights. Groenewald attacked early, bloodying Potts in the first round with heavy punches and elbows, but fell victim to exhaustion in the second, and tapped to a rear naked choke. Francois ‘Franaconda’ Groenewald made his case for a shot at the bantamweight champion with a first round submission of Durban’s Baldwin Mdlalose. The Durbanite let loose with some dangerous striking in the first round, but Groenewald’s astute ground game kept him ahead. He took the win by standing guillotine in the first.

Former welterweight champion Dino ‘The Lion’ Bagattin opened the night’s main card. After over a year out of action he entered the hexagon to face Port Elizabeth’s devastating Cameron Pritchard.

Bagattin fired off some punches early, but was soon overwhelmed by the ground game of Pritchard, who took him to the canvas and kept him there for the first round. The second saw the same, but this time Bagattin couldn’t ride the pressure and tapped to a rear-naked choke. Fight of the night was awarded to Dave Mazany vs Leon Mynhardt. Performance bonuses were awarded to Cameron Pritchard, Sylveste Chipfumbu, Ruan Potts, Regis Muyambo and Gary Joshua

All eyes now turn to EFC 56: Du Plessis vs Fadipe, Bahati vs Buirski, Kabesa vs Botha presented by SUPABETS, takes place on Friday 9 December 2016 at Carnival City, Johannesburg. Tickets are on sale now at computicket.com, and the 5 main card bouts will be broadcast live on kwesesports.com (Sub-Saharan Africa) and Kwesé Free Sports (Kenya & Rwanda) starting at 20:00 (CAT) and delayed-live on e.tv (South Africa) after the 20:30 (CAT) movie. Full broadcast details available on www.efcworldwide.com.