WHO IS CAMERON PRITCHARD 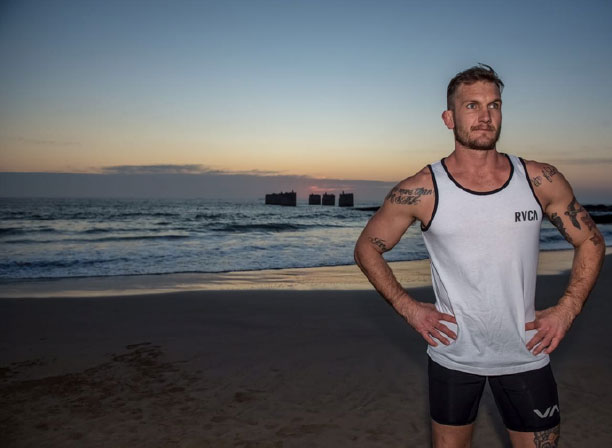 Cameron Pritchard post training on the beach in Port Elizabeth.

Cape Town, South Africa – Port Elizabeth’s Cameron Pritchard is considered by many to be the next big thing in the EFC welterweight division. He is currently undefeated in three fights and one step away from a shot at the title. Now he faces the biggest challenge in his career so far, in the former champion Dino ‘The Lion’ Bagattin in Cape Town later this month.

World renowned photographer Anton Geyser visited Pritchard to capture the rising star in preparation for the biggest fight of his career.

Pritchard is a former life guard and rescue diver, now turned full time Mixed Martial Artist. “I started training December 2010 after watching EFC on TV. I thought it looked cool and thought it would be fun to do. Years down the line, it is now my passion,” explained Pritchard.

Pritchard has been out of action for just under a year, where he last faced DRC’s Kabulu. He feels he is still at the top of the division. “This is my first fight back after knee surgery,” stated Pritchard. He continued, “I tore my PCL, I had to literally learn how to walk again.”

Training under the legendary Chris Bright out of PESFA, Pritchard is well known for his grappling and submission skills. He also has boxing skills to match some of the best in the division, having KO’d Pupanga Tresor in an astonishing twenty-three seconds. The work he is doing under the tutelage of his boxing coach Keplar Wessels is clearly paying off.

He further backed this up by saying, “Dino will provide the platform to prove I am the best welterweight in the organisation. Then I am coming for the title.”