A quick look at what's in store 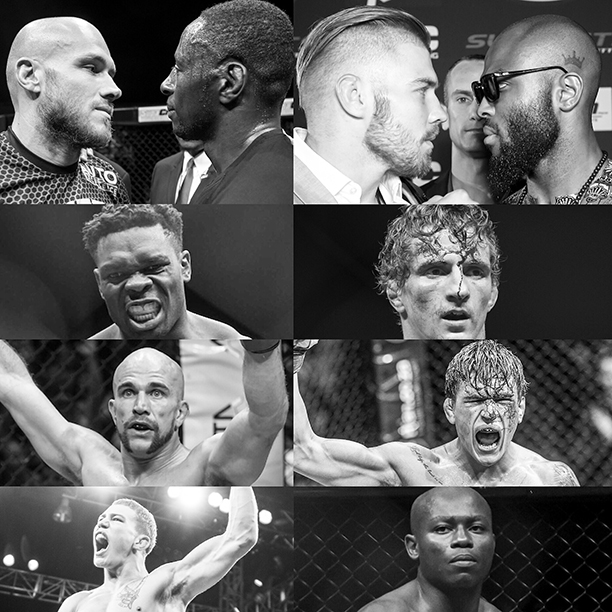 Johannesburg, South Africa – 2016 has been massive and 2017 is looking to be even bigger. Huge bouts have already been planned for the coming year and many more are sure to develop. Here are the confirmed headlining bouts for the beginning of the year.

Known for his polarizing personality, Wessels has opted to not defend his belt against the interim champ and rather move down to conquer his goals in another division.

‘Champion’ Dalcha Lungiambula won the interim title in a spectacular five-round war against the formidable Tumelo Maphutha. He has shown time and time again that his Judo is unmatched in the organisation, having tossed, swept and thrown literally everyone that has stood in front of him. Holding victories over the reigning middleweight champ, a former heavyweight champ and countless other big names, Dalcha Lungiambula is a force to be reckoned with.

Only one man has ever been able to stop the powerhouse from DRC, Norman ‘Chef’ Wessels. However, it is now confirmed that Wessels will be dropping down to middleweight and relinquishing the coveted light heavyweight title to Dalcha.

Michiel Opperman has risen as the new threat. Like a phoenix rising from the ashes, the ‘Dark Horse’ accepted a late notice fight against Bahati and knocked out the ‘British Behmoth’ in twelve seconds earning him the top contender position.

With teammates Dricus du Plessis and David Buirski in welterweight and middleweight divisions respectively, Opperman has decided to chase gold in the bigger light heavyweight division.

EFC heads back south to the Mother City for the highly anticipated lightweight title fight between USA’s Dave ‘Pain Train’ Mazany and South Africa’s Don ‘Magic Man’ Madge… and not much more is needed to say about that, it is going to be huge!

Nkazimulo Zulu vs JP Buys – Flyweight Title Unification
Nkazimulo ‘Zuluboy’ Zulu has made South African history multiple times. He was the first bantam champion and the first flyweight champion. During his reign, he was selected as one of the best from around the world to take place in ‘The Ultimate Fighter’ season 24 tournament. While he has been away competing in the reality show and training alongside some of USA’s top athletes, an interim flyweight champion was crowned.

JP Buys first made headlines with his TKO victory over EFC veteran Abdul Hassan. He followed up that stellar performance with a first round submission over Baldwin Mdlalose to claim interim EFC Gold. But as the saying goes, there can only be one. Now the reigning champion Zulu and the interim champion Buys will collide to decide who is the true ruler of the division.

Du Plessis was supposed to make his first title defence against Ireland’s heavy hitting Henry ‘Herculeez’ Fadipe. However, due to injury it was not to be.

The two MMA superstars are set to clash soon in one of the most highly anticipated fights in EFC history.

With so much more to come, these are just the tip of the iceberg of what 2017 holds in store for fans. Keep watching EFC social media for all the latest news and fight announcements for the coming year.