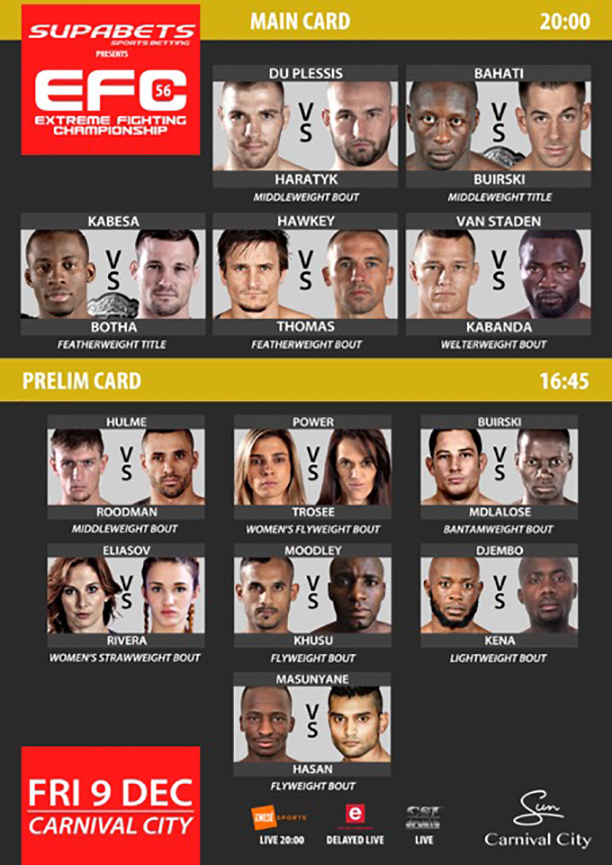 Johannesburg, South Africa – The final event of the year is just around the corner and anticipation continues to build. Every fight on next Friday’s event is absolutely massive and below we highlight every single one to get you even more excited.

Dricus du Plessis is out to build his legacy as one of the best EFC athletes of all time, but he has a near unstoppable middleweight contender in Poland’s Rafal Haratyk to deal with first.

He is brash and outspoken, the middleweight champ Yannick Bahati is out for vengeance against TEAM CIT when he faces the only man to successfully defend the welterweight belt, David Buirski.

Undefeated featherweight Igeu Kabesa champ claims to be the best in the organisation and it is hard to argue with his list of accomplishments, but knockout artist Hanru Botha doesn’t agree.

Two of the best strikers in the organisation collide in what is expected by many pundits to be ‘Fight of the Night’ when South Africa’s Wesley Hawkey takes-on Wales’ Azi Thomas.

South African MMA legend Martin van Staden is moving to lightweight and so is rising DRC Kaleka Kabanda. But who will maintain their notorious power and who will crumble under pressure?

They’ve met before, and in one week, as completely new men, they’ll meet again.

One wants to reclaim her top spot, the other is out to earn hers.

Buirski needs another big win to continue with his title aspirations, beating a former contender is one definite way to put the division on notice.

The Spaniard enters with 6 wins and 6 finishes behind her… The South African enters, with 1.

The Drubanite, Moodley, looks for his second win, Khusu makes history as the first athlete from the Fighting Fit Development programme to turn pro.

DRC versus DRC, when two the country’s best warriors do battle.

An exceptional wrestler versus and brilliant kickboxer, it’s a classic grappler versus striker match-up to kick-off EFC 56 with a bang.