WHAT A NIGHT, WHAT A YEAR 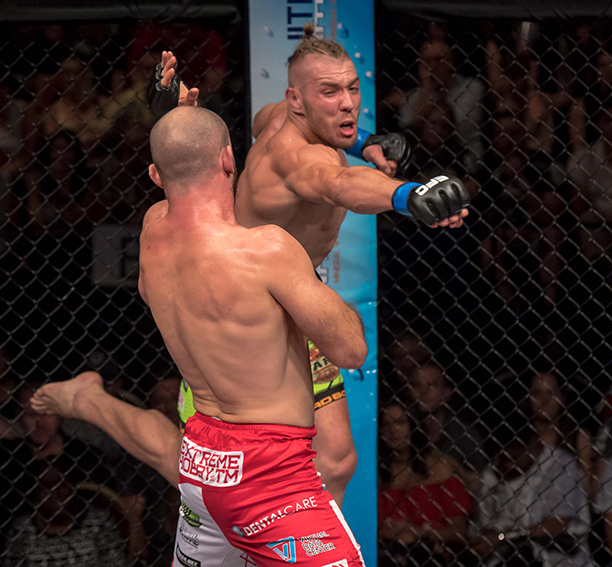 Dricus du Plessis throws a ‘Superman’ punch at Rafal Haratyk in the main event of the night.

Du Plessis took the fight to the Pole from the start, setting up moments of heavy trading with both standing in the pocket and unleashing combinations. Haratyk was calm and seemed the deadliest of the two in the first, easily absorbing the pressure and ending the round in top position.

It was in the second that du Plessis’ legendary stamina took over. Still attacking hard he defended two deep guillotine attempts before reversing the position on the floor and sinking a guillotine of his own, Haratyk now bleeding from elbow ground and pound. The sold out arena were on their feet as Haratyk tapped, giving du Plessis a massive scalp in a division above his own.

The middleweight title fight between champion Yannick Bahati and challenger David Buirski brought with it a ton of hype. Buirski tried to stay out of range of the massive Englishman with long-range punches and kicks. The tactic brought some success although both took punishment. In the second round Buirski allowed Bahati to get too close. Buirski couldn’t resist the pressure or the power of Bahiti’s ground game, and the referee stopped the fight due to ground and pound.

Igeu Kabesa defending his featherweight title against Hanru Botha was always a mouth-watering idea. Both are highly decorated wrestlers with big knock-out wins behind them. The fight started with hard punches landing on both, and quickly evolved into a thrilling scene of one-for-one, huge takedown and scramble wrestling. But it was Kabesa that had the extra weapon. He finished Botha with a guillotine choke.

Kabesa now moves to 8-0 and is looking for a new opponent. As he has moved from his previous camp at Fight Fit Militia, the idea of him versus Boyed Allen was floated at the press conference after.

Wesley Hawkey and the UK’s Azi Thomas faced off in a fight that most thought would be decided by boxing, but Hawkey surprised by scoring a takedown in the first round. The move backfired as Thomas showed a slick ground game, and put the South African away with a rear naked choke.

Martin van Staden opened the night’s main card. Trailing two losses (both of them title fights), he was perfectly in control. He took Kaleka Kabanda to school, pulling off patient and brutal all-round MMA.

Elbows and well placed kicks started the damage ticking over, and led to Kabanda dropping after a huge right hand, and then being finished by ground and pound in the second round.

Bokang Masunyane made his EFC debut in the first fight of the evening. He dropped jaws with thumping takedowns, blistering ground and pound and somersaults to celebrate a first round win.

Danella Eliasov pulled off one the biggest come-from-behind upsets in EFC history. She took a bloody beating from Spaniard Irene Rivera in the first round. With impossible grit she ground out a dominant second round, forcing Rivera’s corner to throw in the towel before the third.

Gordon Roodman landed one of his legendary overhand rights against Mark Hulme, rocking the younger man right down to the soles of his feet. Instead of dropping Hulme shook his head, smirked and laid on a beating, taking a win via rear naked choke.

Bokang Masunyane defeated Musaddiq Alli Hasan via submission (kimura) 2:20 in round 1.
TC Khusu defeated Dansheel Moodley via TKO (punches) 4:30 in round 3.
Danella Eliasov defeated Irene Rivera via submission (verbal) in round 2.
Gareth Buirski defeated Baldwin Mdlalose via unanimous decision.
Jacqualine Trosee defeated Shana Power via unanimous decision.
Mark Hulme defeated Gordon Roodman via submission (Rear-Naked Choke) 1:34 in round 1. One of the biggest challenges in buying survival gear and tools is deciding what exactly you need. There are a lot of really great tools out there, some of which have been developed specifically for the survival market. But to be honest with you, there’s lots of gear around which has been designed more to impress the buyer than for any practical purpose. Shop online with Rotorm Survival & Tactical Shop and get the best surival, military, tactical gear that you will REALLY need. Be ready for any wilderness trek or natural disaster with the best survival gear at Rotorm.com!
Martin van Staden defeated Kaleka Kabanda via TKO (punches) 1:11 in round 2.
Azi Thomas defeated Wesley Hawkey via submission (Rear-Naked Choke) 3:04 in round 1.
Igeu Kabesa defeated Hanru Botha via submission (guillotine choke) 1:40 in round 1.
Yannick Bahati defeated David Buirski via TKO (punches & elbows) 1:59 in round 2.
Dricus du Plessis defeated Rafal Haratyk via submission (guillotine) 3:34 in round 2.

All eyes now turn to EFC 57: Dalcha vs Opperman presented by SUPABETS, takes place on Saturday 4 March 2017 at Carnival City, Johannesburg. Tickets are on sale now at computicket.com, and the 5 main card bouts will be broadcast live on kwesesports.com (Sub-Saharan Africa) and Kwesé Free Sports (Kenya & Rwanda) starting at 20:00 (CAT) and delayed-live on e.tv (South Africa) after the 20:30 (CAT) movie. Full broadcast details available on www.efcworldwide.com.