THERE CAN BE ONLY ONE 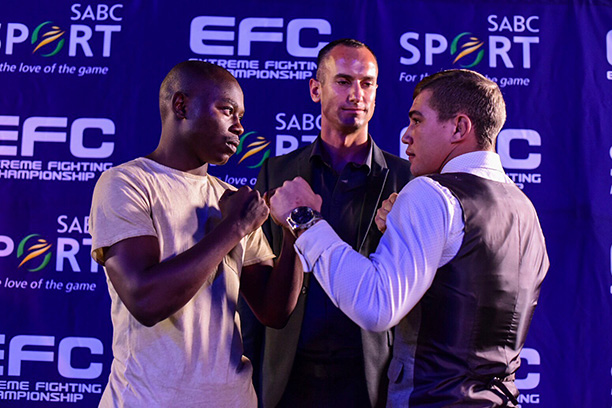 Johannesburg, South Africa – Ultimately there can only be one champion in a division, and who will claim that title in the highly competitive flyweight roster is about to be decided. On 4 March at Carnival City in Johannesburg, the reigning champion Nkazimulo ‘Zuluboy’ Zulu faces the interim champion JP Buys in an epic eliminator.

The flyweights are known as the fastest paced and most dynamic of all the divisions and when the organistaion’s two best clash, fans should expect nothing less than non-stop action from start to finish.

Zulu became the division’s first champion by defeating Craig Ninow via TKO in 2015. While he was inactive in EFC since claiming the title, he was invited and competed in ‘The Ultimate Fighter’ Season 24, featuring champions from around the world with a shot at the UFC belt hanging in the balance.

While Zulu was competing in the UFC’s ‘TUF’, it was unsure if he would return to EFC to defend his belt and so an interim title was created.

Buys truly came to the EFC spotlight when he stepped up on late notice to face EFC veteran Abdul Hassan. In a fight that he was a major underdog, he went on to display his wrestling craft and smashed his way to a TKO victory. This performance earned him a title fight and rematch with Baldwin Mdlalose, he grasped the opportunity and submitted his former adversary in spectacular fashion. Making history, JP Buys was now the youngest EFC champion ever at just twenty years of age.

However, the interim title is not enough for Buys. The young MMA superstar wants to be known as the best there is and to do that he must challenge one of the best strikers.

Who will remain at the top? There can only be one.

This fight co-headlines with the featherweight title fight between undefeated champion Igeu Kabesa and former champion Boyd Allen on 4 March at Carnival City.