MMA legends, Leon Mynhardt and Martin van Staden are confirmed to face-off in an epic showdown 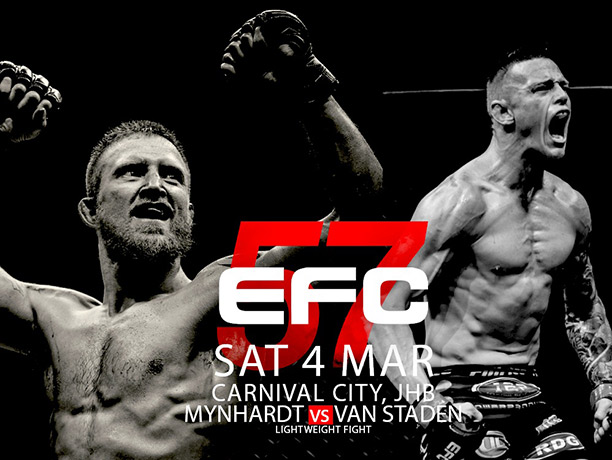 Johannesburg, South Africa – A change that fans are guaranteed to be excited about has been made and one of the most requested fights in EFC history has just been confirmed. Two mega legends of South African MMA are set to collide as the former lightweight champion Leon ‘Iron Lion’ Mynhardt faces the most experienced athlete in the organisation, Martin ‘The Punisher’ van Staden.

There is a fight that has been brought up time and time again. The first time that Mynhardt and van Staden met it was a clash of epic proportions. It is a fight fans have requested to see take place, but under the bright lights of a world stage. They first met in July 2010, with van Staden walking away the victor via a second-round guillotine. Mynhardt evened the score in March 2011 taking the decision. They now meet again, but in a new division with years of experience and new skills to back it up.

Mynhardt (17-9) was a dominant champion for three years, he ruled the division with his iron jaw and ferocious striking. A man that always steps up to a challenge head on as he grits his teeth and collides with the man in front of him with unfathomable determination and heart. Now looking to rebuild his career, smashing a big name such, as van Staden, give the credence that Mynhardt is still one of the best in the organisation.

Standing opposite the Hexagon from Mynhardt on 4 March will be one of the most feared strikers in EFC. Referred to as a technical brawler, ‘The Punisher’ van Staden (23-10) has earned his name for the destructive nature of his fists. With a recent move from welter to lightweight, he has brought his KO power to the lighter division with devastating effects, including a scary TKO over the notoriously tough Kaleka Kabanda.

When two heroes of the sport collide, two men vastly experienced and battle hardened, fans should expect a war of heavy-laden fists if the first two fights anything to go by.

This fight takes place on the main card ahead of the featherweight title fight between DRC’s Igeu Kabesa and Scotland’s Danny Henry.