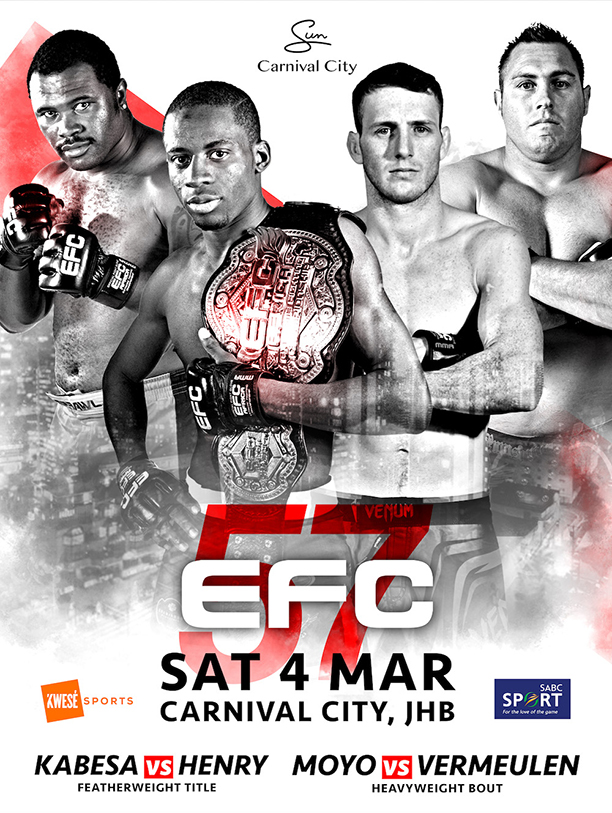 Johannesburg, South Africa – Scotland’s Danny Henry made headlines when he handed Boyd Allen his first ever loss in EFC. Now fate turns in his favour as he steps in to replace an injured Allen and steps in to face Igeu ‘Smiley’ Kabesa. Standing in on late notice, he not only gets the chance to seek vengeance against his defeat to Kabesa, but also has the opportunity to claim EFC gold in the process.

Former champion and number one contender, Boyd Allen, has withdrawn from his featherweight title fight against Kabesa with a wrist injury. Allen was preparing for the title fight in Miami, Florida at the famous American Top Team when the injury occurred.

When reached for comment, Allen stated, “Injuries are normal and unfortunately I have learnt that you should never fight if your body isn’t ready.” Allen added his thoughts on the Kabesa vs Henry rematch, “It will be interesting to see how both fighters have progressed since their first fight.”

This sets up potentially the biggest rematch in recent memory, between the undefeated champion, Kabesa, and the former champion, Scotsman Henry. It has been noted that Allen will most likely face the winner when he is ready to compete again.

Since claiming the championship from Henry, Kabesa has defended the title against Hanru Botha in stunning fashion, with a first-round submission and solidified his hold on the title and division. Meanwhile, since their first meeting, Henry has dispatched two former title challengers with spectacular striking.

“It’s never good to hear about a fighter getting injured, but this is the fight I’ve worked hard for a deserve,” stated Henry. He continued, “I’m going to make the most of this opportunity in March and snatch my belt back!”

Two second-round TKOs cemented Henry as the top contender. However, it was Kabesa’s wrestling that was his undoing in the first clash. Has Henry fixed this weakness in his armour or has he and his team figured out the conundrum that is Kabesa?

This fight takes place as the main event on a stacked fight card featuring many of organisation’s best athletes including the heavyweight collision between Zimbabwe’s Elvis Moyo and South Africa’s Mike Vermeulen.