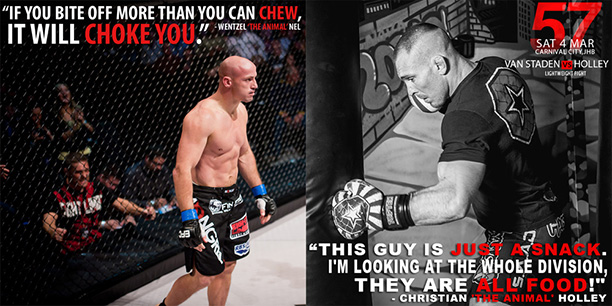 Johannesburg, South Africa – The very first man to ever be crowned the lightweight EFC champion is none other than the much-loved South African Wentzel ‘The Animal’ Nel. He recently took to social media to give a stern warning to EFC newcomer who shares the same nickname as he, Christian ‘The Animal’ Holley ahead of his 4 March fight against Martin ‘The Punisher’ van Staden.

Commenting on a post about Holley where the Englishman stated that his South African opponent is merely just a snack, Nel cleverly worded: “Let’s hope he lives up to the hype. Martin is no walk over or easy snack. One must remember with food, if you bite off more than you can chew, it will choke you.”

Holley, lives and trains in Mollaga, Spain out of SAAD/ASW Gym. With an eighty-percentage finishing rate, he has faced some of the biggest names in combat sports such as Artem Lobov and Roger Huerta.

However, van Staden is one of the most experienced athletes in the organisation with over thirty fights. He too holds an exceptional finishing rate of over eighty-percentage. Van Staden has faced the who’s who in South African MMA, as well has MMA legends such as Brian Ebersole.

The world and South Africa specifically will be watching van Staden vs Holley closely on 4 March and not only is it bound to be a tense battle, but will give fans insight as to what sort of level the top South African athletes are on.

The bout features on the main card next to the featherweight championship clash and many other exciting match-ups. See efcworldwide.com for more.