VAN STADEN TO TACKLE HOLLEY AT FIRST EVENT OF THE YEAR 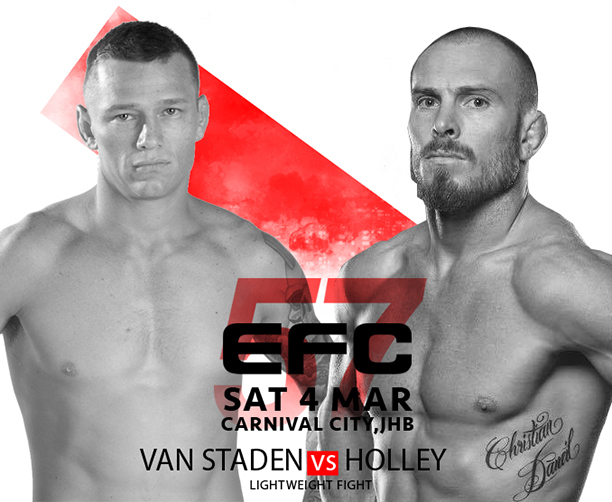 Johannesburg, South Africa – It was revealed earlier today that EFC had signed a new British/Spanish athlete in Christian ‘The Animal’ Holley and he would debut at EFC 57 on 4 March. He will face the notorious South African, Martin ‘The Punisher’ van Staden on the main card at Carnival City.

Van Staden (23-10) was originally scheduled to face another South African legend in Leon Mynhardt, but due to complications; the fight has been postponed. Van Staden was hungry to fight, as he is coming off a training camp in Miami, Florida in USA at the famous American Top Team gym. Eager to show the new skills he has developed, he jumped at the opportunity to face a touring athlete of Holley’s resume.

Van Staden is still scheduled to face Mynhardt in May at EFC 59.

Holley will enter the Hexagon with an impressive 10-3 professional MMA record and having finished eighty percent of his opponents. With his devastating power, he plans to knockout all who stand in front of him and work his way to title contention. Fighting out of Spain, the Brit brings his own unique blend of Karate to the Hexagon, that is seldom seen inside the Hexagon.

A fight that pits two elite heavy-hitters against each other, is sure to produce action that will keep fans on the edge of their seats throughout.

Van Staden vs Holley main card fight takes place ahead of the featherweight title bout at Carnival City in Johannesburg between the undefeated champion, DRC’s Igeu Kabesa, and the challenger, Scotland’s Danny Henry.