WORLD CONFLICT AT THE FIRST EVENT OF THE YEAR 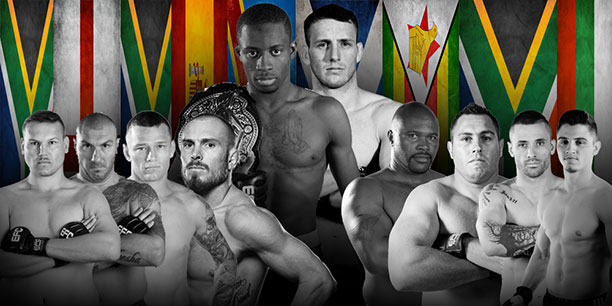 Johannesburg, South Africa – On Saturday 4 March all eyes will set focus on Carnival City for the first EFC event of the year. Not only is the event headlined by an epic rematch title fight between DRC’s Igeu Kabesa and Scotland’s Danny Henry, but it also see’s a high number of other foreign competitors coming from far and wide to take center stage.

“It’s really great that the inaugural event of 2017 features so many athletes from so many nations,” stated EFC President Cairo Howarth. “Some travel so far and others reside in RSA, but representing your country while competing in front of the world is pretty special. Can’t wait to see the guys go!”

The title fight is one of many exciting bouts scheduled for the evening. A potential heavyweight number one contender bout is also scheduled for the main card as Zimbabwe’s Elvis Moyo faces South Africa’s Michael Vermeulen. Moyo, a former African boxing champion versus Vermeulen, an aggressive all-rounder on a four-fight win streak, is guaranteed to be nothing short of explosive from start to finish.

Plus, making his way from England via training camp in Spain comes KO artist Christian Holley in his EFC debut. He is set to take-on a South African Mixed Martial Arts legend, Martin van Staden. Two heavy hitters that can end a fight in a single punch are sure to produce an explosive finish.

England’s Tony Mustard returns to South Africa for his second EFC bout to tackle the undefeated South African heavyweight Wessel Mostert. Both men have won all their bouts with early finishes and will be aiming to keep their finish rates at one hundred percent and climb up the heavyweight ladder.

And set to open the main card with a bang, sees the heavy hitting South African, Gordon Roodman, go up against the young up-and-comer from Bulgaria, Georgie Georgiev. Although, living and training in Durban, South Africa; Georgiev wears the Bulgarian flag proudly whenever he enters the Hexagon.

All this and so much more on the preliminary card featuring some of the biggest names and up-and-comers in Mixed Martial Arts.

With seven competing nations from around the world, fans do not want to miss the first event of the year. Get your tickets from Computicket now to watch it live at Carnival City Johannesburg.