CONFIRMED: DU PLESSIS TO FIGHT FADIPE AT CARNIVAL CITY ON MAY 13 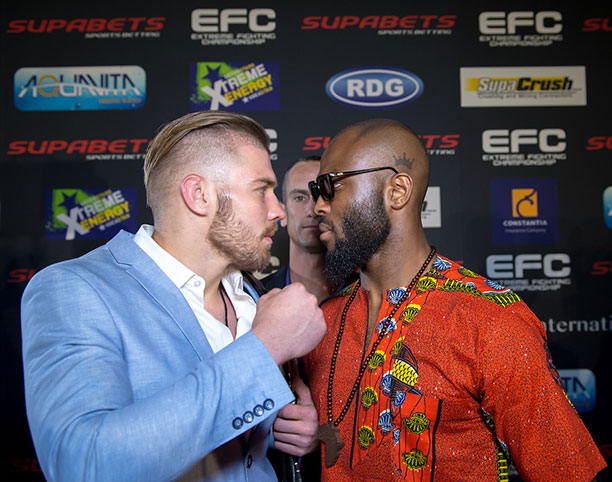 Johannesburg, South Africa – It is now officially confirmed that South Africa’s Dricus ‘Stillknocks’ du Plessis will defend his welterweight championship against the former champion, Ireland’s Henry ‘Herculeez’ Fadipe. This massive title fight is set to headline EFC 59 on Saturday 13 May 2017 at Carnival City.

Du Plessis captured the notorious welterweight championship in Sun City, in a spectacular war with another EFC legend, Martin van Staden. He followed that up with another incredible win over middleweight contender, Poland’s Rafal Haratyk. Du Plessis is young and hungry, but battle hardened. He has grown from strength to strength with every outing in the Hexagon and welcomes any and all challenges that come his way. With only one loss on his exemplary record too, he has submitted or finished everyone else he has faced, including some of the biggest names to have featured in the Hexagon.

He now stands opposite a new challenge, possibly his biggest yet, the hard-hitting KO artist Henry Fadipe has returned. The Irishman born in Nigeria is fast, he is accurate and he has some of the most devastating power ever witnessed. After a two-year hiatus, Fadipe returned last year looking better than ever. With his fluid boxing skills, long range kicks and explosive jumping knees; he looked near unstoppable. He is hungrier than ever to reclaim the belt and sit atop the welterweight division once again.

EFC 59: Du Plessis vs Fadipe, presented by www.BetXchange.com takes place on Saturday 13 May 2017 at Carnival City, Johannesburg. Tickets are on sale soon at www.computicket.com, and the 5 main card bouts will be broadcast live on kwesesports.com (Sub-Saharan Africa), Kwesé Free Sports (Kenya & Rwanda) and live in South Africa on SABC 3 starting at 21:00 (CAT). Full broadcast details available on www.efcworldwide.com.