EXCLUSIVE RELEASE OF THE EFC 58 COUNTDOWN

Watch in HD on the Kwese app now 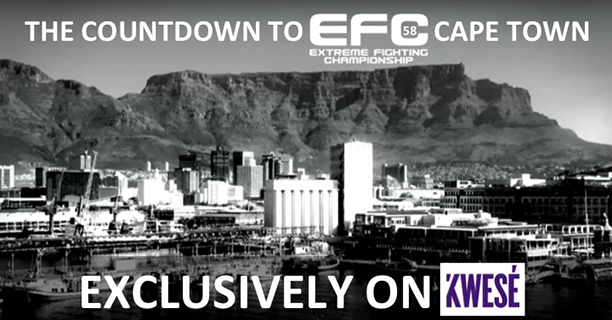 Cape Town, South Africa – EFC in Cape Town is just around the corner and with just under two weeks to go, the official Countdown to the highly anticipated event is available to watch in HD exclusively on the Kwesé App to fight fans in Sub-Saharan Africa now.

Premiering on the Kwesé App ahead of the worldwide release, the Countdown show features EFC 58’s headlining lightweight title fight between the champion USA’s Dave Mazany and South Africa’s challenger, Don Madge plus features the former interim bantamweight champion, Irshaad Sayed, and the ever electrifying Tumisang Madiba ahead of their main event bout.

Download the Kwesé App and watch the Countdown to EFC 58: Mazany vs Madge, Sayed vs Madiba now! The Kwesé App is available for free download from the Google Play Store and IOS App Store.

The Countdown show will be available to watch worldwide on EFC official social media platforms and www.efcworldwide.com from Wednesday 29 March. It will also be premiered on South African television this Saturday from 21:00 on SABC 3.