KICKING OFF THE YEAR IN STYLE 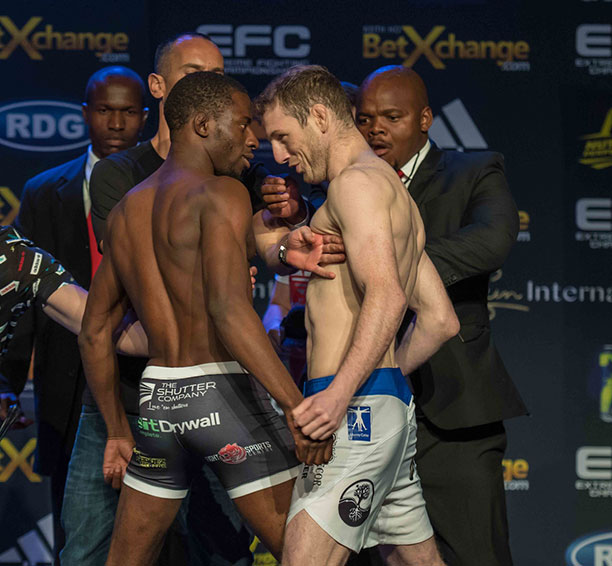 Johannesburg, South Africa – Earlier today, twenty-two of the world’s toughest athletes faced-off with each other at the official EFC 57 weigh-in, ahead of the organisation’s bumper first event of the year tomorrow night.

EFC 57 is headlined by the grudge rematch for the featherweight title between the undefeated champion, Igeu ‘Smiley’ Kabesa and the Scottish challenger and former champion, Danny Henry. The main card is brim filled with athletes who can deliver fight of the night performances.

Henry lost his championship to Kabesa when they first met almost exactly a year ago at the very same venue. Now the Scot is out for vengeance and determined to reclaim what he believes is rightfully his. Meanwhile, Kabesa’s confidence nearly failed him during the morning’s weigh-in and pre-medical checks, when he came in 750 grams overweight. EFC official’s and doctors cited that he was not allowed to cut any more weight to preserve his health. Even though Kabesa failed to make weight, the bout remains a title fight. Kabesa’s failure to make weight added more fuel to an already intense rivalry between the two.

“I promised the fans something and they are gonna get it tomorrow,” confidently stated the champion Kabesa in his interview. The Scotsman stated, “You can expect me to go home with the belt again.” Henry continued, “Sorry South Africa.”

In the penultimate fight of the night, former title challenger Elvis Moyo faces Michael Vermeulen with a potential title shot for the victor. Moyo is fresh off one of the most memorable heavyweight fights in the organisation’s history, while Vermeulen is riding a massive four-fight winning streak.

Spain’s Christian Holley makes his EFC debut tomorrow night and has a massive task facing him in South African MMA legend, Martin ‘The Punisher’ van Staden. This will be van Staden’s first fight at lightweight, who looks to be in fantastic shape with no evident side effects from the weight cut. Both men have exemplary finishing rates and are known for their heavy punching power, making an action packed bout an absolute certainty.

Undefeated South African heavyweight Wessel ‘Wess Express’ Mostert goes up against England’s knockout artist Tony ‘Oosh’ Mustard in the second heavyweight bout on the main card. Both of these men boast a 100% finish rate in fights they have won, making fireworks a distinct possibility.

Opening the card is South African fan favourite Gordon ‘Rage’ Roodman up against Bulgaria’s powerful Georgi ‘The Bulgarian Beast’ Georgiev. Two men that are relentless in their pursuit of the perfect KO, are sure to deliver on the night.

The official EFC 57 weigh-in results are as follows: