Explosive weigh-in ahead of EFC 58 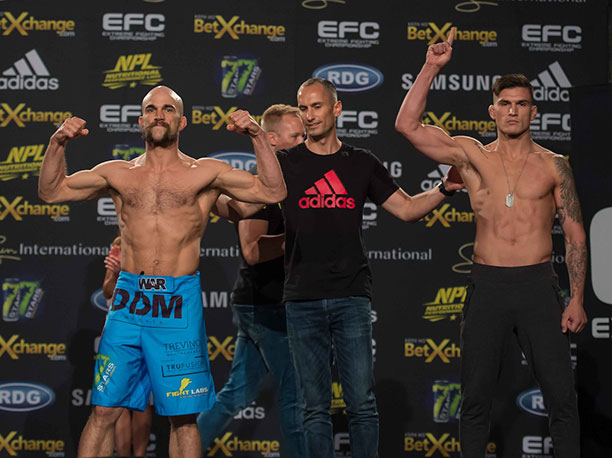 Cape Town, South Africa – Cape Town’s 2017 fight calendar kicked off today, when the EFC 58 weigh-in went out live across the country and the world, ahead of tomorrow night’s thrilling EFC 58 fight night.

Crowd support for Mazany and Madge was huge, due in part to the brand new EFC Engaged series, offering fight fans a new and unfiltered view of their private lives as they prepare for fight night. Watch the full EFC 58 Engaged series here: http://bit.ly/2ogln3Q

Madge hit the scale first, acknowledging his screaming fans with a roar as his weight was announced, and then turning ice-cold and all business as he waited for the champion.

Mazany, an Alaskan and native of Las Vegas, has carved a colossal local following with his wild social media antics, committed performances and endless time to speak with fans. It showed with the crowd staying on their feet as he emerged.

That Madge is the rightful challenger is without question, the absolute silence that settled as they stared each other down spoke volumes of how intensely fight fans are looking forward to their bout. It will be the ultimate test of skill and character, with no man a clear favourite.

Sayed stepped onto stage with his usual showman’s flare, sporting blaring socks with billionaire gangster cap and shades. He’s shown himself to be the king of mind games at weigh-ins past, but today he met his match. Madiba casually plucked the shades from Sayed’s face and put them on himself, Sayed looking rattled at Madiba’s slick table-turn. It took security to keep the two apart.

If their pre-fight banter was all talk before today, the line has now been crossed. Most fans would score ‘round weigh-in’ to Madiba.

Supporting tomorrow night’s top two bouts is a beast of a card.

Former champion and former UFC heavyweight Ruan ‘Fangz’ Potts faces England’s terrifying Karl Etherington in his EFC debut. The stage shook with both Potts and Etherington padding across it, both clearing 115kg of pure muscle.

Veteran Abdul ‘Hollywood’ Hassan looked shredded and focused, glaring up at the almost a head taller Sylvester Chipfumbu. ‘Strike from distance, knock him out’ the rangy Chipfumbu must have been musing. ‘Take him down, grind him out,’ would be Hassan’s decorated grappler’s response.

It was all fire when former welterweight champion Dino ‘The Lion’ Bagattin stepped into the lights. He faces Cape Town’s wild man Shaun De Lange tomorrow. De Lange is known for his grit and growing skill set, with all of his fights being unforgettable spectacles. Bagattin must win to prove his legacy and will use tempered, brutal striking, while De Lange is fired up to take the scalp of a King by leaving it all in the Hexagon.

The official EFC 58 weigh-in results are as follows:

EFC 58: Mazany vs Madge, is presented by www.BetXchange.com, and takes place on Saturday 8 April 2017 at GrandWest, Cape Town. Tickets are on sale now at computicket.com, and the 5 main card bouts will be broadcast live on kwesesports.com (Sub-Saharan Africa), Kwesé Free Sports (Kenya & Rwanda) and live in South Africa on SABC 3 starting at 21:00 (CAT). Full broadcast details available on www.efcworldwide.com.