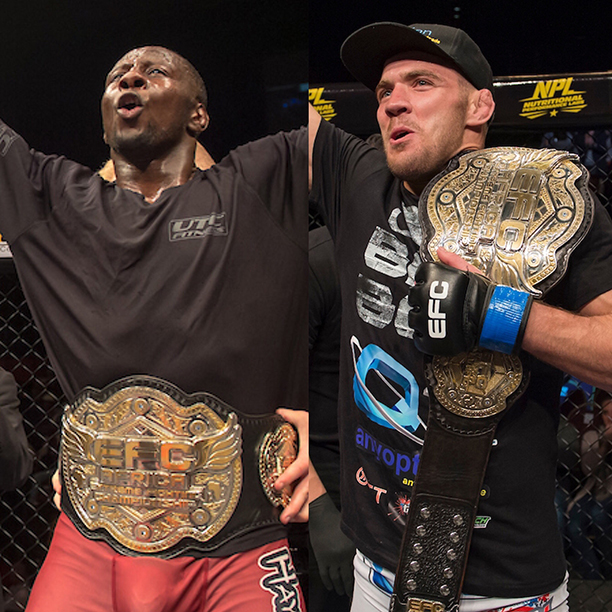 Du Plessis first signed with EFC over four years ago. He was only just an adult, but he had his eyes firmly set on claiming gold as the youngest in history. Immediately, with his gutsy performances, he started making waves in the organisation. On the way to the top, he amassed a 4-0 record that earned him a middleweight title shot against Garreth McLellan. Many said it was too soon for the young Pretoria powerhouse and many were correct. He lost his first and only fight against the soon to be UFC athlete.

It was a career defining moment for du Plessis, and one that saw him get better and grow from strength-to-strength. Since, he has gone on to capture the welterweight title and has defended it and finished all opposition in his path.

Du Plessis now has his sights firmly set on becoming EFC’s first two-division champion, but with that he has found the formidable Englishman standing in his way.

Since his last fight in EFC, the British behemoth, Yannick Bahati has claimed the BAMMA middleweight world title and is dead-set on defending both.

It is no secret that these two elite athletes hold little but disdain for each other. They have often had verbal jousts over social media and at press conferences and have nearly come to blows backstage at past events.

Two of the greatest athletes are going head-to-head in what could be the biggest match-up in the organisation’s history, and just who will walk away holding two belts On 19 August remains to be seen.