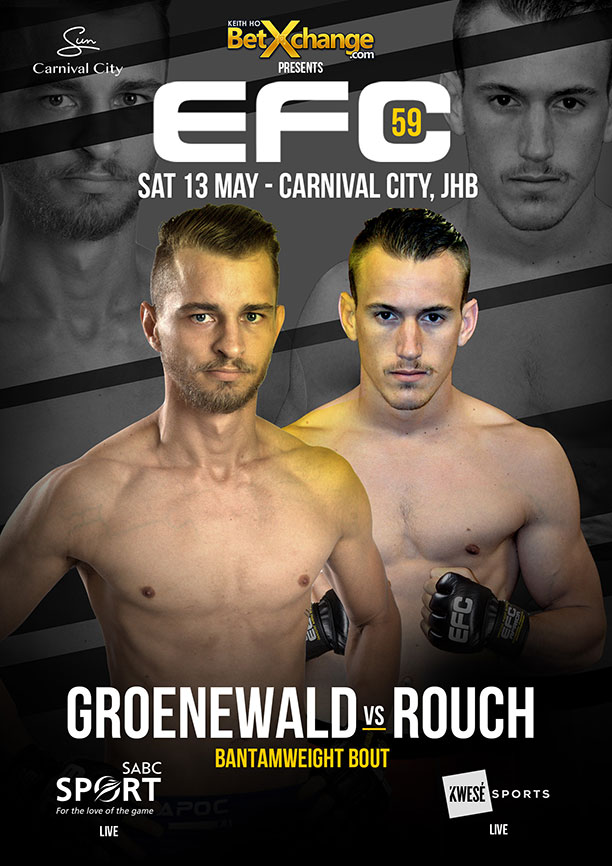 Johannesburg, South Africa – A new threat in the bantamweight division has arrived in the form of Phillipe ‘Le Terrible’ Rouch and he is dead-set on claiming EFC gold. This will be no easy task in such a talent-stacked division, but he will begin his campaign for EFC glory next Saturday at Carnival City at EFC 59.

Rouch holds a formidable record of 5-3, but is currently riding incredible momentum with a four-fight winning streak. Three of which via submission and the fourth via TKO. He has in fact, never been to a decision; and leaves it all in the Hexagon.

When asked where he sees his strengths, Rouch responded, “I am a well-rounded fighter, I can strike, wrestle and have a very solid ground game.” He continued, “I train out of Bushido Academie alongside European BJJ champions every day; and that is where I am most dangerous.”

Rouch has a peculiar fighting alias and his coach explains where it came from, “The personality of Phillipe can be sometimes ‘weird’, sometimes it’s very difficult to see emotions on his face. Phillipe doesn’t talk too much, doesn’t smile too much, the exact opposite of our last EFC star Cyril Asker. However, Phillipe has an incredibly strong mind, that’s why we call him ‘Le terrible’.”

Rouch has put everything on the line to make his dream a reality, his coach James explains, “I call Philippe Friday and said him, ‘Hey Phillipe, you got a six-fight contract with EFC!’ Monday, he calls me back and he says, ‘Coach, I quit this morning from my long-time job for training for my arrival in EFC.’ So, I said to Phillipe, ‘Mate, you got a wife and kid!’ He answered, ‘in a few years, my son and wife will be proud of me!’ It means everything for him! He is just 24, trained for 6 years under me and is certainly my most serious fighter.”

Seemingly out of character, Rouch has taken to social media recently to lambaste his South African opponent, Groenewald by responding to Groenewald’s claim of being victorious simply with, “Bi#ch please!”.

Rouch is set to make his EFC debut on 13 May at EFC 59 in Carnival City, just ahead of the highly anticipated welterweight title fight.