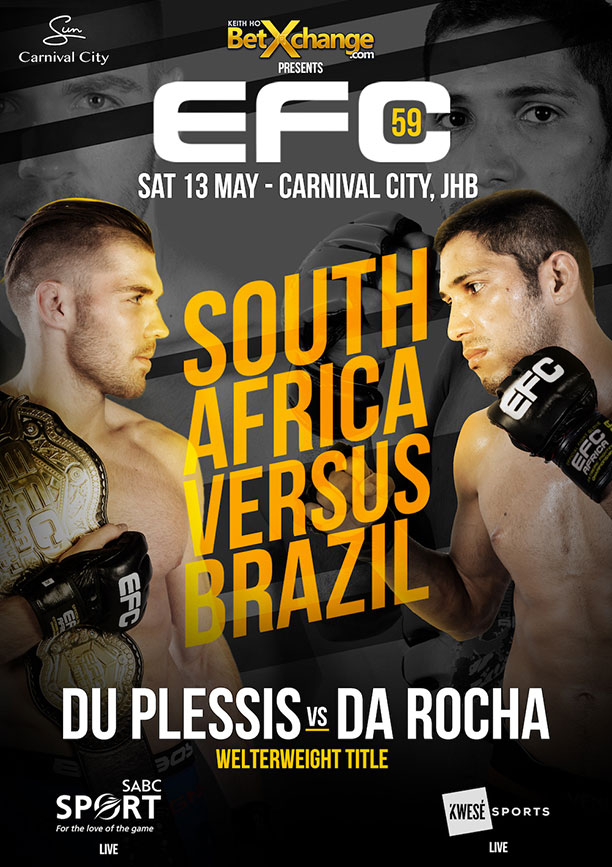 Johannesburg, South Africa – The camp of Henry Fadipe have unfortunately confirmed to EFC, that due to his ongoing passport and RSA visa struggles, he will not be able to travel from Ireland to South Africa by the 13th of May and is forced to step out of the title fight against the champion Dricus du Plessis.

Brazil’s Jose da Rocha has stepped in to take on the massive task of meeting du Plessis.

This is not the first time that the former EFC champion has succumbed to these unfortunate travel circumstances, but after Fadipe was able to make it to South Africa again and competed in Sun City late last year, he was convinced that he would be able to make it now. Unfortunately though, it was not to be.

“This is a real pity, especially for Fadipe,” stated EFC president Cairo Howarth. “It is so frustrating for him and for all of us that he is unable to travel here and I wish there was something more that we could do,” he added. “But I am really glad, that within the short space of time we had, we have found a credible replacement and in doing so, a massive challenge for South Africa’s du Plessis.” Howarth concluded.

The champion is now set to defend against an opponent of caliber, which he has never faced before. Making the trip to South Africa for the first time is an incredibly dangerous Brazilian with a battle hardened past.

The majority of his MMA wins have come by way of submission, but it is clear that he has exceptional striking and he is looking forward to showcasing his skillset on a massive international platform.

“It means everything to me to fight for an international title and bring it back to Brazil,” stated Da Rocha upon signing. “I’m honored to represent my country and show that we can achieve anything if we work hard.”

He faces a monstrous task ahead in du Plessis, but he is confident of victory. “I’ve looked at some videos of him and he appears to be a well-rounded fighter,” stated Da Rocha on his opponent. He continued, “but there are several holes in his game and whether the fight takes place on the feet or on the ground, I believe I’ll have the advantage and I’ll be able to finish him.”