DU PLESSIS DOES IT FOR SA

First round victory at EFC 59 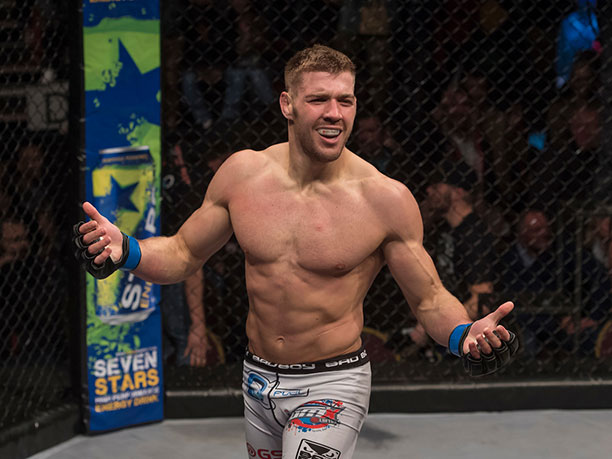 It was a bold move accepting a challenger from the Pitbull Brothers Gym, one of the most notorious fight teams on the planet on only two weeks notice, and it paid off.

Du Plessis engaged with his usual blistering style. Fearlessly taking the BJJ black belt Da Rocha to the ground, and then nailing him to the canvas with brutal ground and pound.

Du Plessis has repeatedly called for middleweight champion Yannick Bahati next, in a bid to hold two EFC titles before the end of the year.

As often happens with fights trailing big fire in their build up, the result came quickly. Cummins took de Lange down almost immediately, then set about sapping his will with stifling top control, before finally sinking a rear naked choke to end it in the first round.

Cummins has since thrown his hat into a bout with fast talking Dino Bagattin, who could be seen Hexagon side baiting the Englishman.

South African François Groenewald versus France’s Phillipe Roche turned expectations on their head by delivering a riveting three round war, a seamless blend standing and ground fighting that had the crowd mesmerised.

Groenewald is renowned as a submission specialist, but was ultimately undone by the massive heart and slick ground game of the Frenchman, tapping to a triangle choke that dislocated Groenewald’s elbow.

Roche praised his opponent after, calling the fight ‘the toughest of his life’, which was later awarded Fight of the Night. For Roche, it was an epic debut in the EFC organisation.

South Africa’s commonwealth wrestler Pierre Botha made good on his promise to pressure Welsh boxer Azi Thomas with powerful takedowns and top control. To his dismay, however, Thomas responded with intelligent ground defense, keeping the wrestler in his guard, allowing an all-out war to develop over three rounds.

An illegal knee to the face of a grounded Thomas cost Botha a point in the second round, ultimately leading to a majority draw decision. The scrap was hard and even, leaving the crowd satisfied with the result.

Alain Ilunga (DRC) signaled a return to the brutality of his early career with a series of thudding liver kicks to opponent Barend Nienaber (South Africa). It was a spinning back kick to the throat that finished Nienaber however, dropping him just before the buzzer at the end of the first.

Since his transition to the Fight Fit Militia, Ilunga has been building a trail of skillful victories, pushing him to the upper region of the lightweight ranks.

Fight of the Night was awarded to Francois Groenewald vs Phillipe Rocha. Performance bonuses were awarded to Rob Simbowe, Alain Ilunga and Ricky Misholas.

All eyes now turn to EFC 60: Lino vs Trosee 2, presented by BetXchange.com takes place on Saturday 10 June 2017 at Sibaya Casino, Durban. Tickets are on sale soon at www.computicket.com, and the 5 main card bouts will be broadcast live on kwesesports.com (Sub-Saharan Africa), Kwesé Free Sports (Kenya & Rwanda) and live in South Africa on SABC 3 starting at 21:00 (CAT). Full broadcast details available on www.efcworldwide.com.