IT ALL COMES DOWN TO THIS 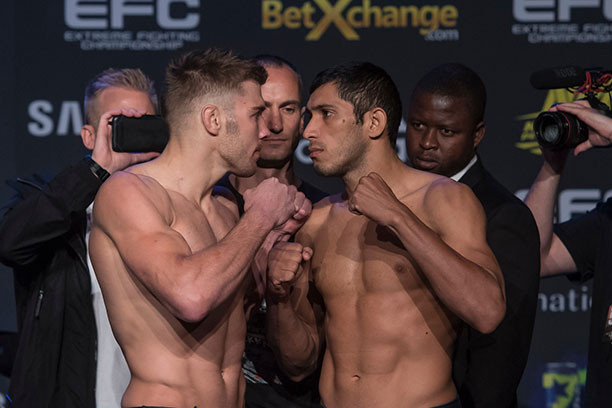 Johannesburg, South Africa – Tomorrow night 24 of the world’s top MMA athletes will go head-to-head in the Hexagon. Today, at the weigh-ins they faced off for the last time.

Hosted at Carnival City’s Mardi Gras Theatre, the official EFC 59 weigh-in gave fans a live forewarning of the carnage that will occur.

Du Plessis’ intent was palpable as he took stock of his opponent. Da Rocha was just as intense, leaning in to accept the challenge of the South African, carrying the hopes of his country on his shoulders.

“Any opponent, anytime, anywhere. said Du Plessis. “No matter where it goes, I’ll be ready for it.”

“I am not afraid, I am here to perform,” responded Da Rocha via the means of an interpreter.

Preceding the title bout is the match up between England’s Joe Cummins, and South Africa’s Shaun De Lange. Both are renowned crowd pleasers, with De Lange trailing two ‘fight of the night’ awards and a string of brutal performances.

De Lange rushed in to meet Cummins, who stood quiet as his opponent showboated in front of him. They are committed strikers interested in trading punches. An unforgettable bout seems inevitable.

Making his EFC Worldwide debut, France’s Phillipe Rouch roared at the crowd before sizing up his South African opponent Francois Groenewald. Groenewald is a former title contender, and the winner of tomorrow night’s bout may well be booking a shot against undefeated champion, Angola’s Demarte Pena.

Welshman Azi Thomas has been making equal amounts of friends and enemies with his outspoken press antics, backed with fists dialed just as high. He has openly mocked his opponent, commonwealth wrestling champion Pierre Botha, and again let rip with a stream of abuse when the two met.

It’s clear that their bout tomorrow night has crossed the line from professional pride to personal. Love Thomas or hate him, fans across the world are glued to the outcome.

Opening tomorrow’s main card is the DRC’s Alain Ilunga against South Africa’s Barend Nienaber. Representing the legendary rivalry between fight camps Fight Fit Militia (Ilunga) and Team CIT (Nienaber), they were all business as they stared each other down.

On tomorrow night’s prelim card it was the heavyweights that made a lasting impression. Nico Yamdjie vs Mpatha Mikixi pits the Cameroon against the DRC, and Ricky Misholas vs Thabani Mndebele the DRC against South Africa.

Seeing the big men face off was a thing to behold, two mountains of muscle quietly promising violence, their intensity stilling the crowd.

The official EFC 59 weigh-in results are as follows: