LIGHTS OUT ON THE NORTH COAST AT EFC 60 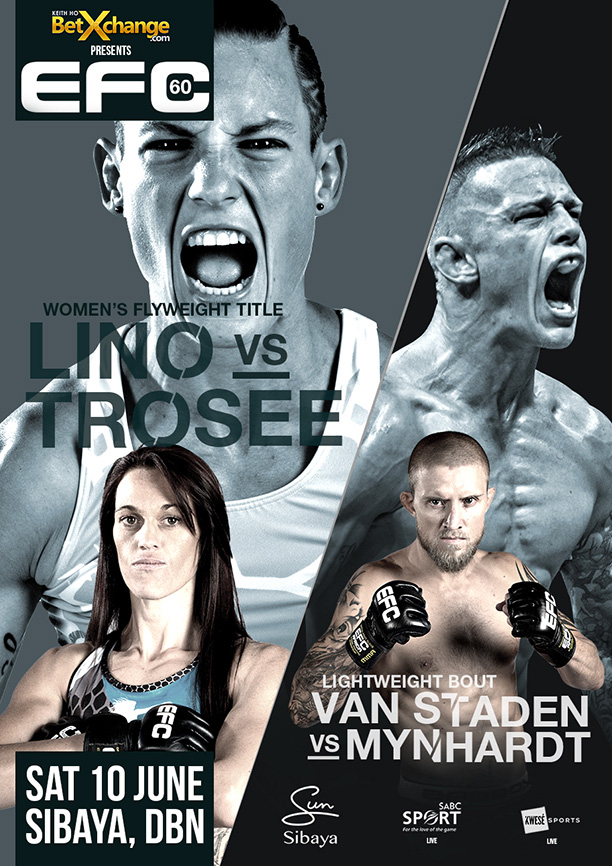 Durban, South Africa – After a year-long absence from the golden coastal city, the biggest MMA organisation this side of the hemisphere is making its highly anticipated return to Durban, and in doing so, is hosting its landmark 60th event.

The night of fights, at the new venue for EFC, Sibaya Casino and Entertainment Kingdom, is headlined by the inaugural EFC women’s flyweight championship. Along with many other exciting bouts, a highly anticipated trilogy battle will also be taking place.

The women’s flyweight division was steeped in controversy last year, when the inaugural championship fight between Amanda Lino and Shana Power was cancelled due to medical reasons.

Flash-forward to the final event of 2016, Power made a return to the Hexagon at catchweight against Trosee. Undefeated, Power was a massive favourite stepping into the bout, but Trosee begged to differ and was out to prove she belongs at the top of the women’s rankings. Over three gruelling rounds, Trosee lived up to her moniker of ‘Demolition’ and stole the show for a unanimous victory. This highly impressive win sets up one of the most anticipated rematches in the organisation’s storied history, as this time the EFC women’s flyweight championship is at stake.

The first time Lino and Trosee collided, fans witnessed a highly aggressive and powerful athlete that caught Trosee very quickly, and finished the fight via TKO in just ten seconds. Trosee was unable to show what she has now proved to be capable of. This time a different story will likely unfold.

The 60th EFC event, and such a big step in MMA history, takes place in the region many consider the birthplace of African MMA, the city of Durban.

Lino commented on her opponent, “I expected Trosee to beat Shana, even though I would have liked to fight her myself. I know Jacqui will bring her best and I wouldn’t want it any other way.” She concluded, “I don’t want to face the Jacqui of old, I want to face the woman that beat Shana, so I know when I win, I have beaten the best.”

Also at EFC 60, a trilogy battle for the ages will precede the main event. Durban favourite, Martin van Staden takes on Pretoria’s Leon Mynhardt. They first met in July 2010, with van Staden walking away the victor. Mynhardt evened the score in March 2011, and at EFC 60 they will finally meet again, but in a new division and with years of experience and skill to back it up.

Don’t miss these historic matchups, plus many other exciting bouts.

“We can’t wait to get to Sibaya,” stated EFC President Cairo Howarth. “I know that Lino and Trosee are both going to bring it, and with the addition of van Staden vs Mynhardt and many others, Durban’s North Coast is sure to get a lights-out event.”