IT DOESN’T GET BIGGER THAN THIS

Heavyweight and light heavyweight titles on the line at Sun City 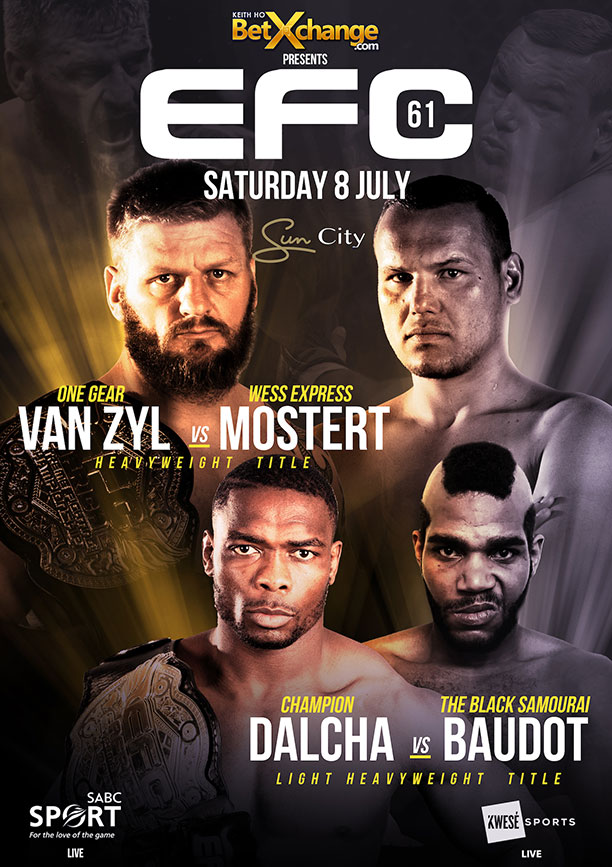 Sun City, South Africa – EFC returns to the ultimate entertainment destination, Sun City, for the organisation’s 61st. event on Saturday 8 July. Both the EFC heavyweight and light heavyweight titles will be contested.

Heavyweight champion, Andrew van Zyl takes on the division’s biggest threat yet, the undefeated Wessel Mostert. The challenger has put away every fighter he has ever faced, but whether he has what it takes to dethrone the iron-jaw of the three-time heavyweight champion is what remains to be seen.

Mostert, Rustenburg’s rising star is not only a massive threat to Van Zyl, but he might just enter the bout, as the local favourite. Sun City is in his home province and crowds will be in full support, but the ‘Wess Express’ faces his absolute toughest challenge in his quest for EFC gold.

Van Zyl is not just a three-time champion, but is renowned for his grappling skills and iron-jaw, and except for his upcoming opponent, the heavyweight champion has withstood and overcome the biggest hits from each and every one of the organisation’s best.

“We are really looking forward to this,” stated EFC President Cairo Howarth. He continued, “Mostert is a legitimate contender, he’s never been stopped and he has a huge chance of beating the champ. This is the perfect fight to headline the Sun City event in the Superbowl.”

Co-headlining what could just be the biggest fight card in history, DRC’s ‘Champion’ Dalcha Lungiambula takes on France’s Alan ‘Black Samurai’ Baudot for the EFC light heavyweight championship of the world.

For some time the champion, Dalcha Lungiambula, was left with none willing to face him, but the absence of a true contender only existed until the organisation’s latest signing raised his hand.

Stepping up to the challenge of facing the formidable DRC athlete is a fighter with a reputation as dangerous as, and as devastating as one ever seen. Holding a perfect, undefeated international fight record of six wins, all by way of KO/TKO, France’s knockout king, Alan Baudot enters.

In addition to these two championship fights another massive heavyweight clash will ensue as the Bulawayo Bomber, Elvis Moyo takes on the highly experienced Stuart Austin from England.

With these mega match-ups, plus 9 more exciting bouts going down at the world famous Sun City Superbowl, it does not get any bigger than this!

EFC 61: Van Zyl vs Mostert, Dalcha vs Baudot is presented by www.BetXchange.com. Tickets are on sale soon at www.computicket.com, and the 5 main card bouts will be broadcast live on kwesesports.com (Sub-Saharan Africa), Kwesé Free Sports 1 (Kenya & Rwanda) and live in South Africa on SABC 3 starting at 21:00 (CAT). Full broadcast details available on www.efcworldwide.com.