It doesn’t get bigger than this 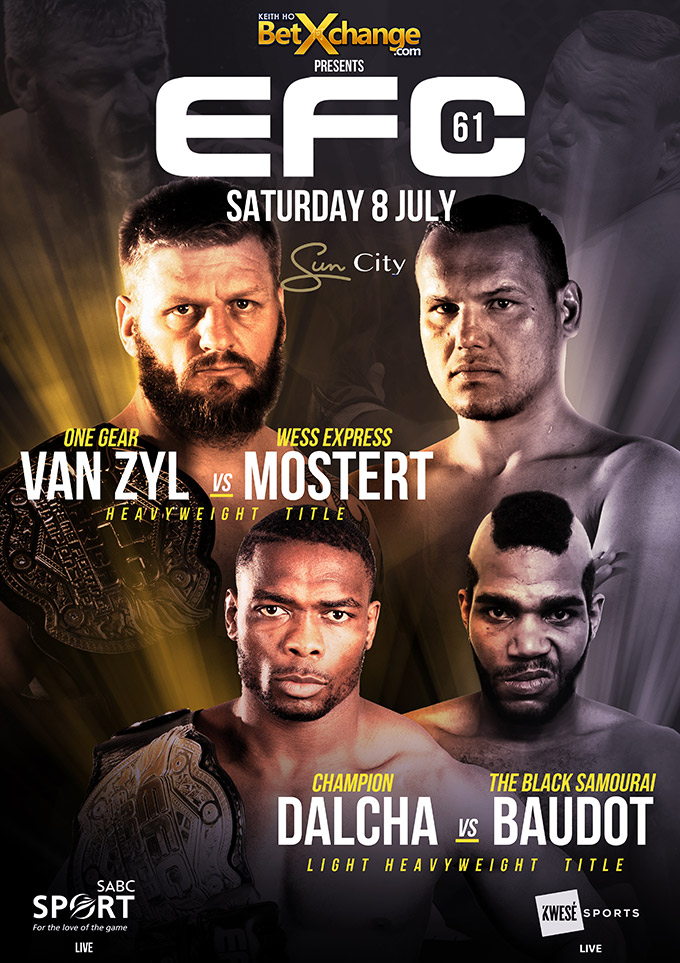 Sun City, South Africa – Get to all the EFC Sun City events, including the weigh-ins, volleyball on the beach with EFC stars and BetXchange girls, a huge fight card plus the official After Party presented by 5FM at Encore. Don’t miss any of the action and plan your weekend away now!

EFC returns to the ultimate entertainment destination for the organisation’s 61st event, where live from the world-famous Superbowl in Sun City, both the EFC heavyweight and light heavyweight titles will be contested.

Heavyweight champion, Andrew van Zyl takes on the division’s biggest threat yet, the undefeated Wessel Mostert. The challenger has put away every fighter he has ever faced, but whether he has what it takes to dethrone the iron-jaw of the three-time heavyweight champion is what remains to be seen. The Countdown to van Zyl vs Mostert is here: https://youtu.be/n8IhvF9EMq4.

Co-headlining what could be the biggest fight card in EFC history, DRC’s ‘Champion’ Dalcha takes on France’s Alan ‘Black Samurai’ Baudot for the EFC light heavyweight championship of the world. For some time Dalcha was left with none willing to face him. But the absence of a true contender only existed until the organisation’s latest signing, the undefeated Alan Baudot, raised his hand. See the Countdown to Dalcha vs Baudot here: https://youtu.be/-uE3xh_0zpo

In addition to the championship bouts, the Bulawayo Bomber, Elvis Moyo takes on the highly experienced Stuart Austin from England, Dino Bagattin goes head-to-head with Bruno Mukulu and Alain Ilunga opens the main card against Anicet Kanyeba. All these main card match-ups plus 8 more exciting bouts, presented by BetXchange.com are going down at the Sun City Superbowl on Saturday 8 July and it doesn’t get any bigger than this!