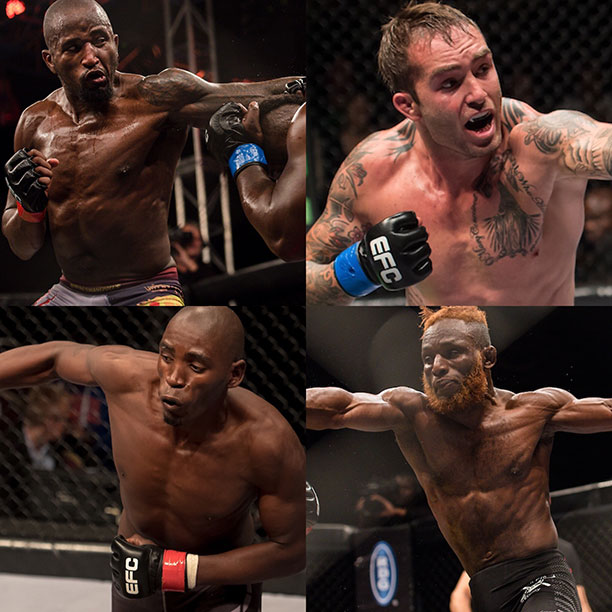 Johannesburg, South Africa – On August 19 the biggest event in EFC history takes place. A whopping three title fights will be fought, including the first ever champion versus champion bout between Yannick Bahati and Dricus du Plessis. The final three fights to complete the EFC 62 card have now been revealed:

Thabani Mndebela vs Wade Henderson – Catchweight
Thabani ‘The Doctor’ Mndebela oozes promise with his dynamic striking and incredible agility for a heavyweight. Fighting out of Team MMA Fighter in Durban, this Karate blackbelt is looking for his second straight win. However, he faces one the most experienced athletes in the organisation. Fighting out of Revive Fitness Centre, Wade Henderson is an EFC legend. Having KO’d the likes of Garreth McLellan in his storied career, on August 19 he will be competing in his fourth weight division – the only man to ever do so in EFC. Henderson has stated this will be his retirement fight. He will want to go out on a high note.

Sifiso Ngcobo vs JP Van Rooyen
Sifiso Ngcobo impressed us in his first two fights against much more experienced opponents. He showed huge fighting spirit and fell just short of a finish on both occasions. Fighting out of Team MMA Fighter in Durban, he enters this bout the wiser for his past mistakes. JP Van Rooyen is a debutant, fighting out of Junkyard MMA in Johannesburg. On August 19 the coin is flipped. Ngcobo brings the experience and Van Rooyen the high expectations of a debutant, as yet untested.

Steven Goncalves vs Claude Ntumba
Claude Ntumba made an impact in his first two EFC bouts. Showing brute strength and technical know-how he recorded two finishes, but the shot at a third was his fall from grace. As any that fight out of Brothers in Arms, he has shown dogged determination to rise again. A fight against Steven Goncalves is the perfect platform. Goncalves seeks a big win to announce his arrival in the division. Fighting out of the famed TapOut Academy, he has the guidance and support to do so.

These fights take place on the prelim card just ahead of the five-fight main card, featuring a massive three title fights.