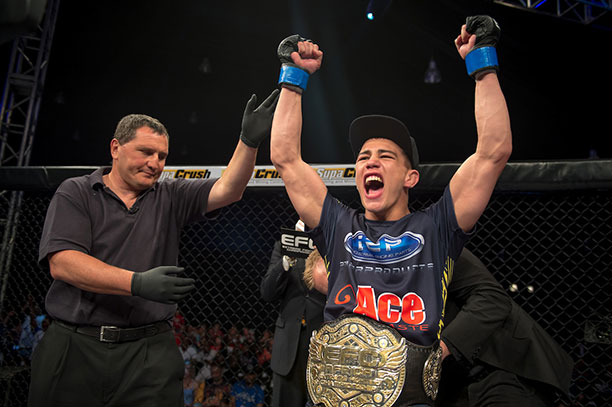 Johannesburg, South Africa – Interim flyweight champion, JP Buys (4-1), has relinquished his EFC title and has signed to compete in ‘Dana White’s Tuesday night Contender series’, making him the third EFC champ to compete in the UFC Octagon in 30 days.

Buys is now the sixth EFC champion overall. He will be facing, Coby Sanchez (10-2). Buys has been training in Sacramento, USA at Team Alpha Male in recent months under the guidance of UFC hall of famer Uriah Faber; when he received the call up to the show.

“We wish JP the best of luck with his endeavours in USA,” stated EFC President Cairo Howarth. “JP being called up is further evidence to the growth of the level of MMA in EFC.”

Buys follows in his predecessor, Nakazimulo ‘Zulu Boy’ Zulu’s, footsteps. Zulu was invited and competed in UFC’s The Ultimate Fighter series, featuring flyweight champions from around the world last year.

With Buys relinquishing the interim belt, reigning flyweight champion Nkazimulo Zulu returns to his status of undisputed champion before he defends against Sylvester Chipfumbu at EFC 62 on 19 August.