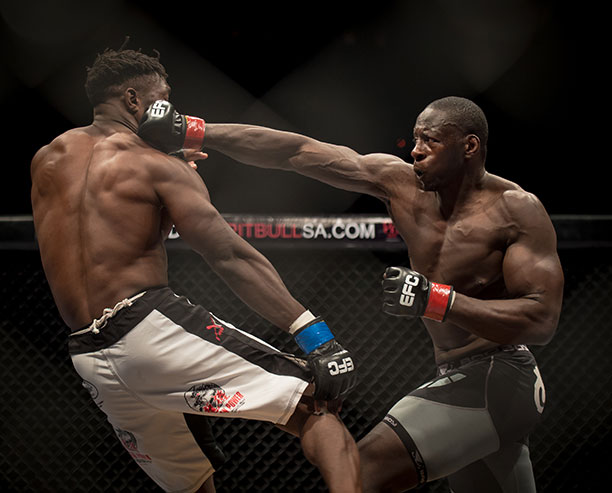 In South Africa over 25% of the population (15.7m) has watched EFC on TV this year, cementing EFC as one of the most watched sports in the country.

“Reaching so many Africans means a lot, for a number of reasons,” said EFC president Cairo Howarth. “There are over 1.2 billion people in Africa, and our growth shows that combat sports is speaking directly to them.”

“We have athletes from Angola, Zimbabwe, Namibia and the DRC,” Howarth continued. “Every week we see a rise in the amount of media coverage they are receiving back home, and their viewership numbers. This means their individual success is growing, which is one of our primary goals. Our athletes’ success is our success, and vice versa.”

“When we started EFC, one of our primary goals was for MMA to become one of the most popular sports on the African continent,” Howarth concluded. “This is now a reality.”

EFC has hosted five incredible events this year so far, and the excitement and level of fights has only increased along with the viewership numbers.

EFC also broadcasts globally on numerous TV networks, in over 120 countries in Europe, Asia and North and South America.

Kwesé Sports, the home of EFC on the continent, broadcasts a range of EFC content, from the live events to the past fights and build-up programming, on free-to-air as well as premium Kwesé TV channels throughout Sub-Saharan Africa. There is also a comprehensive EFC offering on the Kwesé app and continuous coverage on the Kwesé Sports website in partnership with ESPN.

In South Africa, exciting bouts from past EFC events are broadcast every Saturday on SABC 3 at 21:00, and then repeated every Monday at 14:00, with each new upcoming EFC event broadcast live in the Saturday slot.

Up next is EFC 62: Bahati vs Du Plessis, Zulu vs Chipfumbu, Kabesa vs Pierre Botha is presented by www.BetXchange.com and takes place on Saturday 19 August live from Carnival City, Johannesburg, South Africa. Tickets are on sale at www.computicket.com, and the 5 main card bouts will be broadcast live on the Kwesé app (Sub-Saharan Africa) and on the Kwesé Sports 1 TV channel (Botswana, Ghana, Kenya, Lesotho, Malawi, Nigeria, Rwanda, Uganda, Zambia) and live in South Africa on SABC 3 starting at 21:00 (CAT). Full broadcast details available on www.efcworldwide.com.