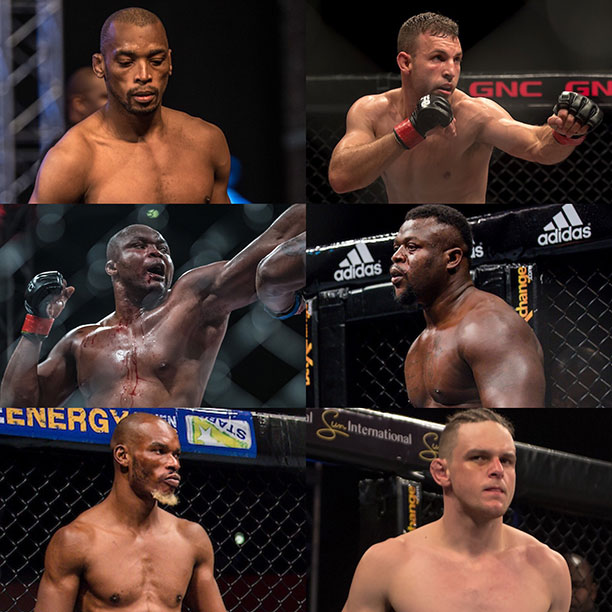 Sindile Manengela hails from Port Elizabeth and fights out of the famed PESFA academy under Chris Bright. A judo black belt with crafty submissions, Manengela is also an aggressive and accurate striker. Fresh off a big win in Durban, he seeks to finally cement his name at EFC 62. Nienaber is a former title contender, routinely standing toe-to-toe with the division’s best. Fighting out of Team CIT in Pretoria and riding a loss, he aims to return to his former glories.

The DRC’s Ricky Misholas has EFC legend status, built on his one-punch KO power. Training out of a new camp (Junkyard MMA), he fought his way to victory in an exhilarating bout at EFC 59. His eye is on the upper reaches of the division, but first he must face the dangerous Cameroonian, Nico Yamdjie. Fighting out of Pro Fitness Kickboxing in Cape Town, Yamdjie has shown he can finish a fight from almost anywhere.

Simon Harle enters the EFC with a massive amateur reputation, having represented South Africa at the amateur MMA world championships in Las Vegas last year. Ruben Groenewald is a world-famous boxer who has held various world titles in different divisions. Harle is new to professional sports, but Groenewald is new to MMA. Their mettle gets tested on August 19.

Both the DRC’s Trezeguet Kanyinda and South Africa’s Stephan De La Rey brought big reputations to their EFC debuts, and both failed to perform. Shell-shocked, it seemed that the lights and the occasion tripped them up. EFC 62 brings them their chance at redemption when they enter the Hex in the first fight of the night.

These fights take place on the prelim card, just ahead of the five-fight main card.

EFC 62: Bahati vs Du Plessis, Zulu vs Chipfumbu is presented by www.BetXchange.com and takes place on Saturday 19 August live from the Carnival City, Johannesburg, RSA. Tickets are on sale at www.computicket.com, and the 5 main card bouts will be broadcast live on kwesesports.com (Sub-Saharan Africa), Kwesé Free Sports 1 (Kenya & Rwanda) and live in South Africa on SABC 3 starting at 21:00 (CAT). Full broadcast details available on www.efcworldwide.com.