“I ADVISE YOU TO RUN, RUN FOR YOUR LIFE” 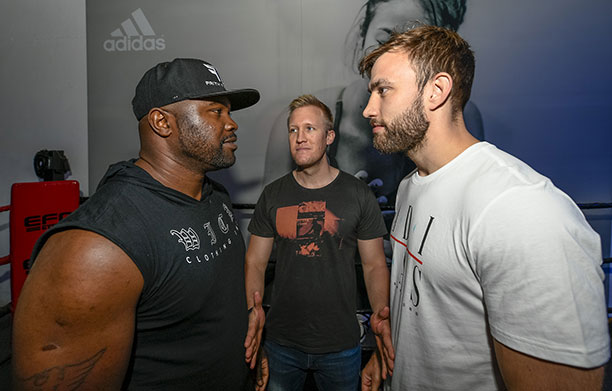 Johannesburg, South Africa – Ahead of their highly anticipated heavyweight bout going down this weekend in Sun City, Zimbabwe’s Elvis Moyo and England’s Stuart Austin stood face-to-face for the first time. The face-off in the center of the boxing ring took place earlier today at the EFC gym in Sandton.

Following are some highlights from the day.

“I keep getting this flash in his eyes on how he falls,” stated Moyo immediately after the stare-down with Stuart. Moyo elaborated when questioned, “It is going to be a stand-up fight. I don’t think he has as much experience as Andrew on the ground and I kept him standing for over twenty minutes.”

Austin was deadpan in his response to the former heavyweight contender, “It is an MMA fight. I am going to fight where ever I want….” He continued, “If I knock him to the floor, that is where it will take place.”

Moyo concluded the face-to-face interviews by interrupting Austin with a warning, “I advise you to run, Stuart… run”.

This bout takes place on the main card, just ahead of the EFC light heavyweight championship fight between Champion Dalcha and Alan Baudot.