One week out from fight night 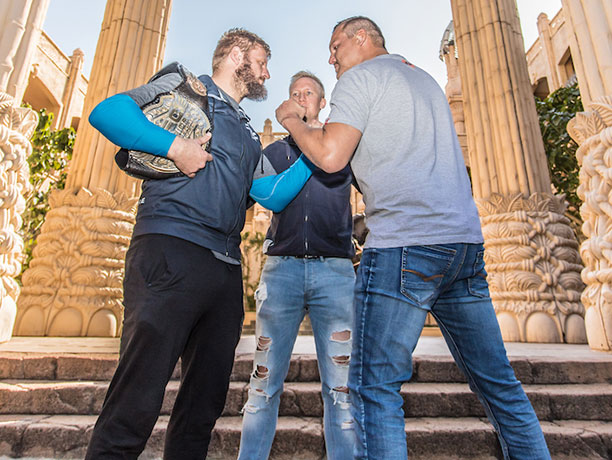 English heavyweight Stuart ‘He-Man’ Austin fights Elvis Moyo, and was first in front of the camera. This is the first time Austin will compete in Africa and he was confident. ‘I’ve never fought in my home town,” he said. ‘I am the guy who goes to everyone else’s town and beats them.”

The full interview, which was filmed live on Facebook, can be viewed here: http://efcww.com/2sxDupw

Up next the heavyweight title challenger, Wessel Mostert, made it clear that he believes his superior boxing skills are the path to victory. ‘With technical boxing I’ll get around his defense. I’ve said it before, I don’t think he has an iron jaw. He protects his jaw well. With my accuracy and timing, I’ll get around that defense. I am going to knock him out.”

The full interviews and face-off can be viewed here: http://efcww.com/2sxE2M0

DRC’s ‘Champion’ Dalcha and France’s Alan Baudot took to the stage. Big takedowns promised by both Judo specialists make it a fight not to be missed.

‘I don’t feel like I have been in a fight if I have not thrown someone,” said Dalcha. ‘I am going to make him fly like a butterfly!”

Dalcha changed tack when he sent out a plea for peace in the war-torn country of the Democratic Republic of the Congo, the place of his birth and the country in which much of his family reside.

Dalcha’s words were heartfelt, reminding all of the complex realities many athletes carry, and put aside, when they step into the Hexagon.

Their full interviews and face-off can be viewed here: http://efcww.com/2sxGr9u

The full day and behind the scenes can be watched on the EFC 61 Engaged show on EFC’s Youtube account in two parts.

The best moments from the day were caught in pictures and can be viewed on EFC’s official Facebook page here: http://efcww.com/2tlsWqB

These fights take place as the main events this Saturday at EFC 61, Sun City.