All on weight for EFC 62 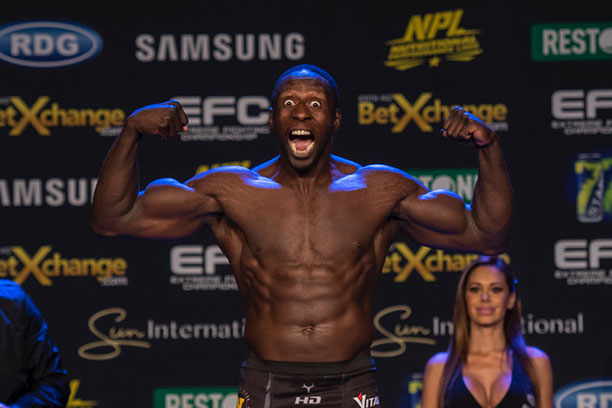 Welterweight champion Dricus Du Plessis and middleweight champion Yannick Bahati headline the event in their champion vs champion bout. Du Plessis kept his distance at their face-off, no doubt a response to Bahati’s slap at their previous press conference.

“Dricus is dancing for me,” said a laughing Bahati, commenting on the welterweight champion’s footwork as they faced off. “He’s celebrating my victory.”

Cool as ever, Du Plessis avoided personal comments and stuck to his intent.

“The goal is to be the first EFC two division champion, and then to become the greatest fighter on the planet. It’s not about him,” said Du Plessis.

Nkazimulo Zulu defends his flyweight title against Zimbabwe’s Sylvester Chipfumbu, and although both have said relatively little in their build-up, their clash oozes violence. EFC commentator Cyres Fees wasn’t able to pull Zulu away from a stare-down that had both locked onto each other.

“I’m taking the belt back to Cape Town,” responded Chipfumbu, clearly itching to get the fight going.

“This is my time, this is my moment,” said Botha, who steps into a five round championship fight for the first time.

Also on the main card, the UK’s Cal Ellenor takes on South African stalwart Gareth Buirski, and Sindile Manengela and Barend Nienaber open the live broadcast. The mood between all was tense respect.

The official EFC 62 weigh-in results are as follows:

EFC 62: Bahati vs Du Plessis, Zulu vs Chipfumbu, Kabesa vs P. Botha is presented by www.BetXchange.com and takes place on Saturday 19 August live from Carnival City, Johannesburg, RSA. Tickets are on sale at www.computicket.com/, and the 5 main card bouts will be broadcast live on kwesesports.com (Sub-Saharan Africa), Kwesé Free Sports 1 (Kenya & Rwanda) and live in South Africa on SABC 3 starting at 21:00 (CAT). Full broadcast details available on www.efcworldwide.com.