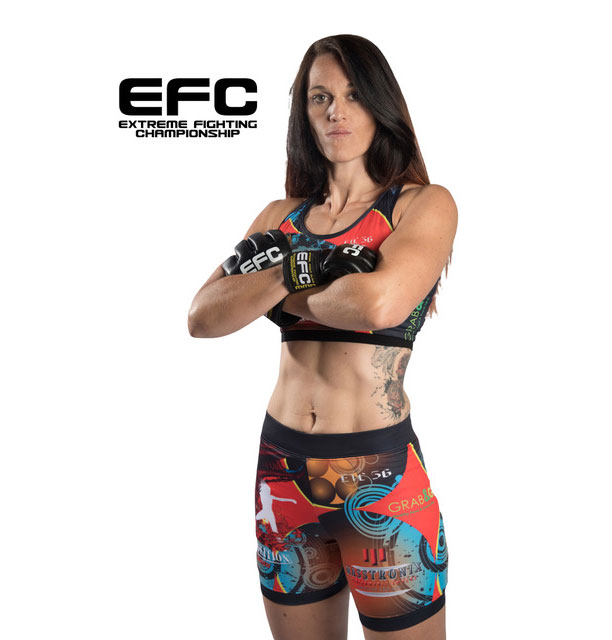 Johannesburg, South Africa – This Women’s Month EFC celebrates the heroines that do battle in the Hexagon, inspiring millions with their courage and grace. Jacqualine Trosee is a former flyweight title contender and a force to be reckoned with as an athlete, a personal trainer and a single mom.

EFC media team sat down with Jacqui to get her thoughts on what it is to be a female fighter, in and outside of the Hexagon.

EFC: “As a female athlete in combat sports, what does Women’s Month mean to you?”

Trosee: “Competing in MMA makes me feel empowered. It gives me the platform to to do what men do, and the opportunity to show that women can do it just as well. So, Women’s Month is a time to recognise that we as women can shine.”

EFC: “Is it more challenging for a woman to train and fight than it is for a man? Can you tell us a bit of your experience?”

Trosee: “[Laughs] Having to fight for a place in a man’s world all the time, fighting in the ring is just another day in the office. ”

EFC: “Was there any difficulty from family and friends when you told them that you wanted to be a fighter?”

Trosee: “Sure. Old fashioned beliefs and ignorance brought all sorts of negative and unsupportive behavior out. But once they were exposed to the sport and me being successful, that all changed. ”

EFC: “Do you feel that society sees you differently as a woman who is a fighter? What is the typical reaction that you get?”

Trosee: “Totally! When I introduce myself as an MMA fighter 90% of women will ask ‘What is that?’ When I tell them they’re shocked because in their world it’s not what a woman does. But some women are blown away, and that’s a good feeling. I believe it’s inspirational. ”

Trosee: “I love the art of it and that it pushes me past limits I never even thought I had. It means a lot to me to be able to show women, through my fighting, that we ain’t fragile and weak! We are capable of anything, in any arena. ”

EFC: “Do you feel that women on the whole are treated fairly today? ”

Trosee: “I’d say that women are still being under appreciated. ”

Trosee: “Well, from an MMA perspective I’d like to see more women competing, and for them to land sponsorships worth as much as men. ”

EFC: “Do you have a message to all of your fans?”

Trosee: “You can be whoever you want to be, don’t let anyone tell you different. ”

Trosee has been invited to talk on SA FM’s radio show this Saturday 12 August between 17:00 and 18:00pm. She will be sharing more about life as a woman in a male dominated sport.