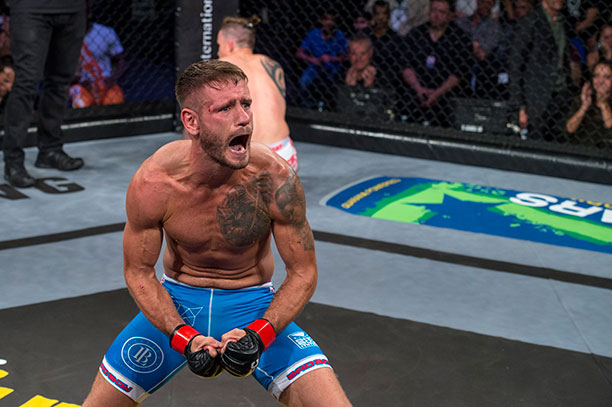 Durban, South Africa – EFC 64 delivered a blistering night of fights at the Sibaya Casino and Entertainment world tonight. Englishman Jay Cucciniello announced a stunning arrival in the featherweight division with a first round finish of local MMA legend Wesley Hawkey, and the ‘Wes Express’, Wessel Mostert, took a decision victory over the Congo’s Ricky Misholas at heavyweight.

Cucciniello weathered a storm of punches from Hawkey early, seeming to be on the back foot as the local man found his range. Sensing the necessity, Cucciniello forced the fight to the fence, landed the takedown, and soon after finished with a rear-naked choke.

Immediately after the fight, the legendary Hawkey announced his retirement, drawing the curtain on a storied career that included two title fights, and over a decade of thrilling audiences across the globe.

The co-headlining bout between the Congo’s Ricky Misholas and South Africa’s Wessel Mostert delivered a classic, crunching heavyweight battle. Over three rounds the combatants pushed each other to the brink of exhaustion, alternating between flurries of strikes and repeated takedowns. Ultimately it was Mostert that displayed superior conditioning and skill, grinding a decision win out of a thrilling fight.

Anicet Kanyeba vs Saxon Delafield began with the controversy of Delafield missing weight, and continued to entertain in the Hexagon.

Delafield quickly pulled guard on the skilled boxer, but was unable to finish multiple triangle and armbar attempts. Exhausted, Delafield gave up his back, allowing Kanyeba to sink his hooks in, and lay down heavy ground and pound. The bout ended in the first with referee Karagiannidis calling it off by TKO due to strikes.

Bold as brass, the on-fire Kanyeba then called for a shot at lightweight champion Don Madge.

Durban’s Tyson Chelin took on Zambia’s Simbowe in a bout trailing a ton of fire. Both attacked from the start, testing each other with strikes before Chelin executed a perfect double leg takedown. Once on the canvas Chelin dominated with top control, chipping away at Simbowe’s resistance until he took the Zambian’s back and sank a rear-naked choke, ending the fight in the first round.

The evening’s main card opened with the collision of two young up-and-comers. Durban’s Yusuf Hassan faced Angola’s Josemar Octavio in a main card debut for both men. The action was frantic from the start, with both swapping guillotine attempts as the action bounced off the fence and hit the deck. Once grounded Octavio took the win by guillotine from bottom position.

On the prelim card many bouts stood out. Local athlete Bumni Ojewole pulled off a sensational comeback victory by finishing world Brazilian Jiu Jitsu champion Katharyna Araujo – by triangle, and the Congo’s Trezegeut Kanyinda, after taking the bout on only 24 hours notice, scored a phenomenal first round KO by takedown, when he knocked opponent Andrew Smith out by literally bouncing his head off the canvas.

Performance bonuses were awarded to Roedie Roets, Radely de Vries, Trezegeut Kanyinda, Josemar Octavio, Tyson Chelin and Jay Cucciniello, and fight of the night was awarded to the bantamweight bout between Luthando Biko and Devon Cronje.

The official EFC 64 results are:

All eyes now turn to EFC 65 Dalcha vs Austin, is presented by BetXchange.com and takes place on Saturday 4 November live from Carnival City, Johannesburg. Tickets are on sale soon at computicket.com, and the 5 main card bouts will be broadcast live on kwesesports.com (Sub-Saharan Africa), Kwesé Free Sports 1 (Kenya & Rwanda) and live in South Africa on SABC 3 starting at 21:00 (CAT). Full broadcast details available on efcworldwide.com.