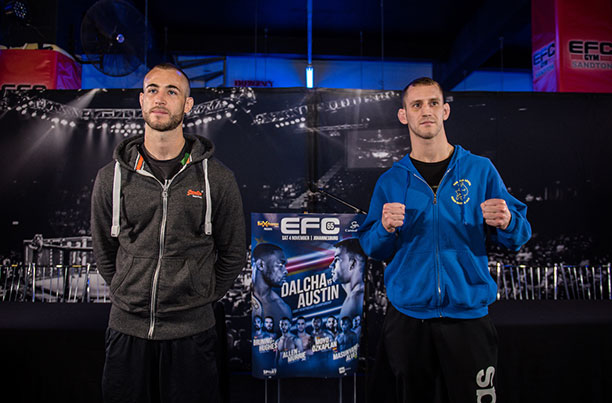 Johannesburg, South Africa – Scotland’s Danny Henry, teammate of Calum Murrie, will be watching this Saturday night’s EFC 65 co-main event closer than many others. The former EFC featherweight champion, who has gone on to successfully compete in the UFC, recently contacted EFC matchmaker Graeme Cartmell about placing a bet on the bout between his training partner and Allen.

“As soon as the odds were out, Danny texted me to place a bet on Calum to win by sub,” Cartmell explained. “He couldn’t believe the odds were so stacked against Calum, especially for a submission win at 10/1.”

Henry is currently a training partner to Murrie at Higher Level in Scotland, as he has been for years. Higher Level and Allen’s own gym in Johannesburg, FFM, have a deep-rooted history. They have faced each other in both championship and main event fights, with a seesawing win ratio between them.

Following the communication between Henry and Cartmell, EFC HQ reached out to the former champ for his insight onto the fight.

“Boyd’s a true competitor and gentleman of the sport,” Henry began, “but realistically I don’t think he has the stopping power to take Calum out, and I can’t see him subbing him either.”

“On the other hand, Callum has an unorthodox bag of tricks and can finish the fight from anywhere. He has a really slick submission game, and hits very hard.”

”Calum’s also the sort of guy that rises to the occasion. The hostile atmosphere in Carnival City will motivate him. Don’t be surprised when my man ‘Bundy’ has his hand raised at the end of this one. I’ll be betting on it.”

For South Africans, phenomenal odds of 3/1 are available on BetXchange, meaning a R1000 bet on Murrie and a win will net R4000.

Henry uncharacteristically ended his breakdown with a message for the reigning lightweight champion. ”PS. Don Madge. Go f*** yourself.”

Allen vs Murrie takes place on the main card just ahead of the EFC light heavyweight championship fight between Champion Dalcha and Stuart Austin.

EFC 65 Dalcha vs Austin is presented by BetXchange.com and takes place on Saturday 4 November live from Carnival City, Johannesburg. Tickets are on sale at computicket.com, and the 5 main card bouts will be broadcast live on kwesesports.com (Sub-Saharan Africa), Kwesé Free Sports 1 (Kenya & Rwanda) and live in South Africa on SABC 3 starting at 21:00 (CAT). Full broadcast details available on efcworldwide.com.