Champ vs. champ, coach vs. coach, heavyweight title and reveal of the ultimate contender 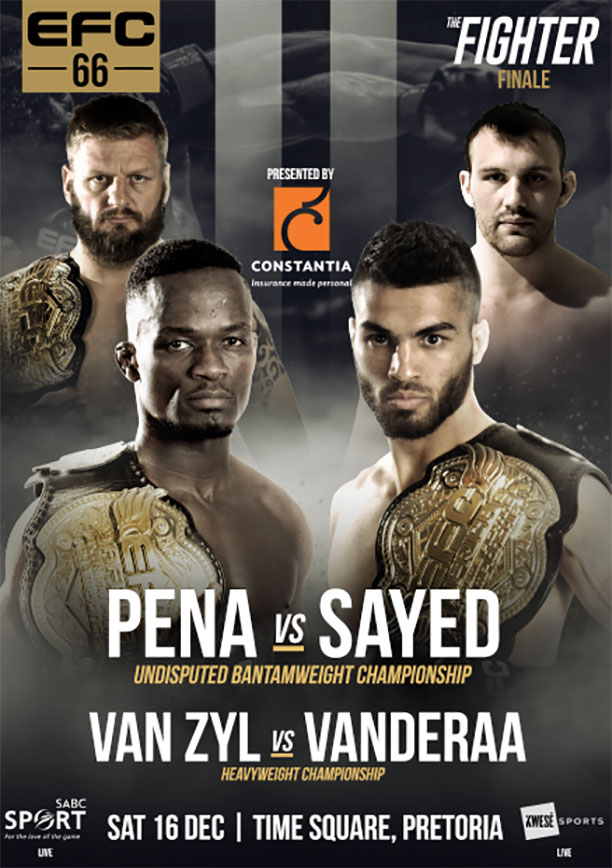 Pretoria, South Africa – On December 16 at Time Square, Pretoria, the biggest rematch in EFC history is set take place, the EFC heavyweight championship will be contested and in addition to these mega-bouts the search for the ultimate contender will be complete.

Undefeated reigning bantamweight champion Demarte Pena, and interim bantamweight champion Irshaad Sayed are once again putting everything on the line, the heavyweight champion Andrew van Zyl has found a new challenger in the form of USA’s Jared Vanderaa, plus, in the finale of ‘The Fighter’ reality TV show, the two remaining undefeated contenders will be going head-to-head for the ultimate prize, a six figure EFC contract and a shot at middleweight gold.

Angola’s Demarte Pena is undoubtedly the most dominant and successful champion in EFC history. Undefeated in twelve fights, the double division titleholder not only has the longest win streak in the organisation, but also lays claim to the most successful title defences ever seen.

Pena and Sayed have fought before and after five gruelling rounds, ‘The Wolf’ was announced the victor. However with far reach consequences, Pena fell victim to contaminated substances and tested positive for banned performance enhances.

The World Anti-Doping Agency overruled the decision and changed the result of the bout to a No-Contest. Sayed was immediately reinstated as the EFC interim champion.

For the former adversaries, turned rivals, the stakes have never been higher. Setting up the biggest rematch in EFC history, the two coaches will collide again to settle the score and unify the bantamweight title.

On the same night and in a waging welterweight war, Brazil’s Jose Da Rocha returns in his hunt for title vengeance as he faces the raw power of DRC’s Pupanga Tresor, and opening the main card is the official No.1 bantamweight contender fight between South Africa’s Gareth Buirski and France’s highly revered Phillipe Rouch.

The newly built world-class arena at Time Square and the capital city of Pretoria are both EFC firsts and with the massive line-up of bouts, it is sure to be a night of fights not to be missed. Tickets are on sale at Computicket now.