IN THE CENTRE OF IT ALL 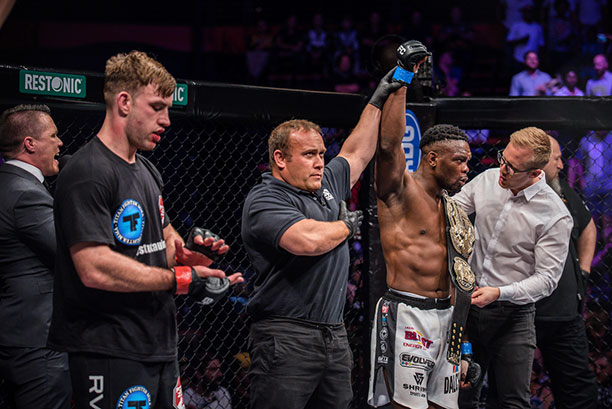 Johannesburg, South Africa – The EFC 65 main event ended in one of the biggest comeback victories of all time, but in some people’s minds, it also ended in controversy. Saturday nights light heavyweight title fight between Champion Dalcha and Stuart Austin ended when the man in the centre of it all, referee Ferdie Basson, called a stop to the contest ruling Dalcha the victor by TKO. Many, including Austin, aired their thoughts on his decision and criticized him for the call.

“Last night I refed a really important title fight with a lot of hype around it at EFC65. Does the hype play a role for me, NO, but the title on the line does.

Why do I take the time to write this up;

1) Out of respect for the fighters, especially the two warriors Stuart Austin and Champion Dalcha. Last night they came out to really contest the rightful owner of the title.

2) Out of respect for the supporters and spectators, letting them understand my decision process.  Why did I not stop it at the end of round 1, but stopped it in the middle of the 2nd round?

Did the time left in the round play a factor? Yes, it certainly did. It determines how much more time is available for the fighter to rain down punishment on his opponent. Was Stuart Austin raining down punishment on Champion towards the end of round one? He certainly did, and when I warned Champion to intelligently defend himself, Stuart turned on the urgency of his attack, but also dropped his accuracy and shots started to miss the target much more. This bought Champion more time, and also gave him the opportunity to punch back, even though this was not great defensively, it definitely showed he was still in the fight. With the reduced accuracy attack of Austin, I would’ve let it go another 20-25 seconds, as Champion was trapped against the cage, and was not making any headway in escaping. Fortunately for Champion there were only 10 seconds left.

When the tables were turned in round 2, Dalcha had a couple of minutes left to rain down heavy hammer fists, and despite 4 warnings to Stuart he did not improve position and regressed into a full fetal position with no attempt to fight back, signaling to me through his body language that he doesn’t want to be there anymore.

Title fights and consistency: Do I or any ref for that matter let title fights go that little bit further? Yes, within reasonable and safe limits. This courtesy is afforded to both contestants, they have earned it, and there’s more on the line for them.

So if Champion was fine at the end of round 1, why did I call in the doctor? There was a pre-existing medical concern that was discussed between the medical team and me, and as always fighter safety trumps all of my other duties.

What did Stuart say to me in the cage after the fight?
I asked Stuart if he was OK? He replied: Yes, my arms were just blown out.

If you want to debate the number of un-answered shots rule then I suggest you read the Unified MMA rules again.

Did I convince you that I was right? That was not the point! I wanted the supporters to understand my decision, and from there make up their mind.”