10 DAYS TO THE BIGGEST REMATCH IN EFC HISTORY

The COUNTDOWN has begun! 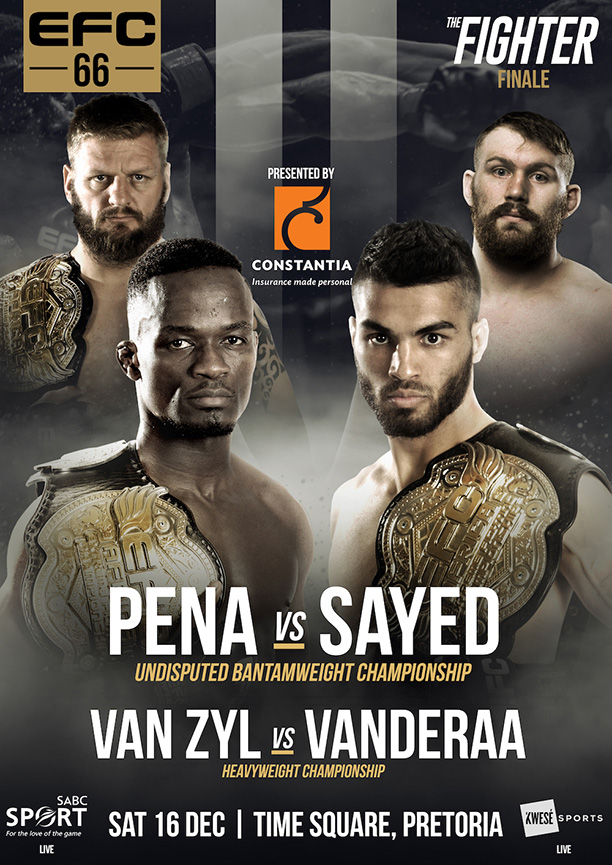 Pretoria, South Africa – On Saturday December 16 at Time Square, Pretoria, the biggest rematch in EFC history is set to take place, the EFC heavyweight championship will be contested. In addition to these mega-bouts, the search for the ultimate contender will be complete.

Undefeated reigning bantamweight champion Demarte Pena, and interim bantamweight champion Irshaad Sayed are once again putting everything on the line. The heavyweight champion Andrew Van Zyl has found a new challenger in the form of USA’s Jared Vanderaa. Plus, in the finale of ‘The Fighter’ reality TV show, the two remaining undefeated contenders will be going head-to-head for the ultimate prize. A six figure EFC contract and a shot at middleweight gold.

On the same night and in a waging welterweight war, Brazil’s Jose Da Rocha returns in his hunt for title vengeance, as he faces the raw power of DRC’s Pupanga Tresor. And opening the main card is the official No.1 bantamweight contender fight between South Africa’s Gareth Buirski and France’s highly revered Phillipe Rouch.

Place your bets at BetXchange.com now!

These plus 9 more exciting bouts make EFC 66, bought to you by Constantia Insurance, a night of fights not to be missed.

EFC 66 Pena vs Sayed 2, the TF1 Finale, is presented by Constantia Insurance and takes place on Saturday 16 December live from Time Square, Pretoria. Tickets are on sale at computicket.com, and the 5 main card bouts will be broadcast live on kwesesports.com (Sub-Saharan Africa), Kwesé Free Sports 1 (Kenya & Rwanda) and live in South Africa on SABC 3 starting at 21:00 (CAT). Full broadcast details available on efcworldwide.com.