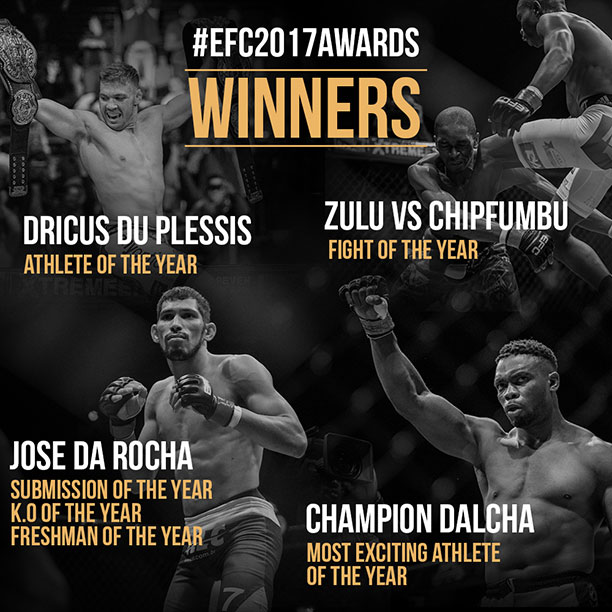 Johannesburg, South Africa – The online #EFC2017Awards, which saw supporters take to the poles over the weekend is complete and the winners, who were voted for by fans on social media, have been chosen. After meticulous counting and recounting, the numbers are in and the results are final!

Congratulations to all the athletes that were nominated and competed in 2017 and thank you to all the supporters and our partners for making the biggest year in EFC history possible!

The EFC 2017 Award results are as follows:

Most EXCITING Athlete of the YEAR – ‘Champion’ Dalcha Lungiambula

Presented by Samsung Mobile SA, this category is reserved for those athletes who always bring a special something extra to the Hexagon.

With a devastating first round KO and an incredible turnaround victory, Dalcha defended his light heavyweight championship twice against dangerous European opposition.

Presented by AquaVita, giving recognition to athletes who made the most impact while debuting in 2017.

In a landslide victory, accumulating over three times the votes of any other nomination in this category. Da Rocha made his debut as a late replacement against Dricus du Plessis for the EFC welterweight championship. While he lost that fight, he returned to action with back-to-back finishes against some of the division’s top-ranked contenders. Da Rocha is a sure prospect and extreme threat to whoever stands opposite him in the Hexagon.

FIGHT of the YEAR – Nkazimulo Zulu vs Sylvester Chipfumbu

Presented by Constantia Insurance, fights don’t get much better than this.

A 4 round EFC flyweight championship war between two of the organisation’s best. Chipfumbu took the advantages with his reach and size advantage in the earlier rounds, while Zulu found his timing and rhythm. But it was the multiple division champ, Zulu, who proved too much and too experienced for the young Zimbabwean, Chipfumbu. Zulu won via TKO in the championship rounds to defend his flyweight crown.

Presented by Keith Ho BetXchange, the most explosive way to finish a fight.

In a narrow race between Dalcha and Da Rocha for the coveted KO of the year award, Da Rocha’s fans just tipped the scale in the Brazilian’s favour. His lightning fast KO victory over South Africa’s Cameron Pritchard left the arena stunned in silence to what they had just been witness to. A spectacular 23 second KO upset and a return to the winning column for the sniper like striking of Brazil’s finest.

Brazil’s Da Rocha continues to dominate the awards. With his well calculated attack on the neck of DRC’s Pupanga Tresor, Da Rocha wrapped up an Anaconda choke in a way that can only be described by its namesake. In hindsight, once Da Rocha grabbed a hold of Tresor, it was an inevitability.

RDG presents the most standout athlete of 2017.

South Africa’s Dricus du Plessis might have only had two fights inside the EFC Hexagon this past year, but it made a huge impact. By defeating Brazil’s Jose Da Rocha and England’s Yannick Bahati, he became the first and only athlete ever to simultaneously hold two divisions’ championships, welter and middleweight. This incredible achievement puts his name in the history books as one of the greatest athletes to have ever competed in the Hexagon.

If 2017 was anything to go by, 2018 is only going to be bigger and better. Th eyear kicks-off with the EFC 67 on 10 March at Carnival City. Boyd Allen challenges former teammate Igeu kabesa for the EFC featherweight title and South Africa’s Danella Eliasov attempts to make history again as she takes-on Italy’s Chiara Penco for the inaugural EFC women’s strawweight title.