EFC BRINGS THE STORM TO THE MOTHER CITY 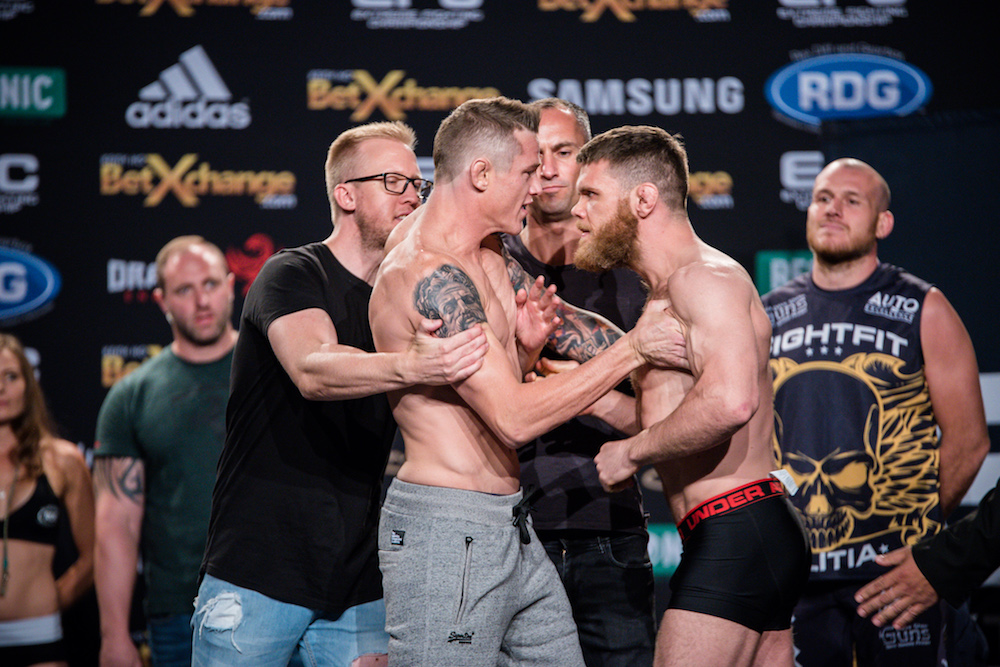 The GrandWest Market Hall was packed to capacity to view the spectacle. Featuring 12 bouts, all 24 athletes hit their target weight.

Animosity between Van Staden and Hughes has been on a slow burn during the build-up, and reached its head when the athletes finally faced each other in the flesh. Their meeting was intense, sucking the sound and seemingly the light from the room.

In stark contrast, the legendary figures of Mazany and Bright leverage their shared status as icons of the sport, and greeted each other warmly, knowing that both will deliver a pinnacle performance in a match without grudge tomorrow.

The combination of brutal intent on the one hand, and the clean will to fight on the other, promises for a special main card.

Cape Town’s Regis Muyambo features third on the main card, taking on the sensational talent of Johannesburg’s Rudie Roets. Both are on a winning tear at present, Roets undefeated in his career (including an amateur world title), and both have emerged from their weight cut in full health and strength.

Sensational rising superstar, Cape Town’s Faeez Jacobs, once again delivered with showman’s flair. He stepped onto the stage with the South African flag painted across his face, and the African continent across his chest. Jacobs is a man of the people. At his last outing he appeared with a Congolese flag draped across his shoulders in tribute to South Africa’s massive Congolese mixed martial arts community, and fought with incredible heart to snatch a highlight reel victory.

Tomorrow he takes on his biggest test yet in England’s superb Cal Ellenor, a prospect that has the entire city on the edge of their seats.

Fellow Capetonian Gary Joshua contends with Durban’s Martin De Beer in the opening bout of the main card. Joshua is undefeated, and well prepared. A move to the Southern Peninsula’s Straight Blast Gym (SBG) has him under expert tutelage.

Both were rearing to go when meeting each other on stage, and promise a fantastic start to the main card.

The official EFC 68 weights are as follows:

EFC 68 Van Staden vs Hughes, Mazany vs Bright is presented by Betxchange.com and takes place on Saturday 31 March live from GrandWest, Cape Town. Tickets are on sale at computicket.com, and the 5 main card bouts will be broadcast live on facebook.com/kwesesports (Sub-Saharan Africa), Kwesé TV (South Africa) and live in South Africa on SABC 3 starting at 21:30 (CAT). Full broadcast details available on efcworldwide.com.