I WILL FIGHT UNTIL THE END

All eyes on ‘Beasty Barbie’ while Kabesa braces for heavier threat 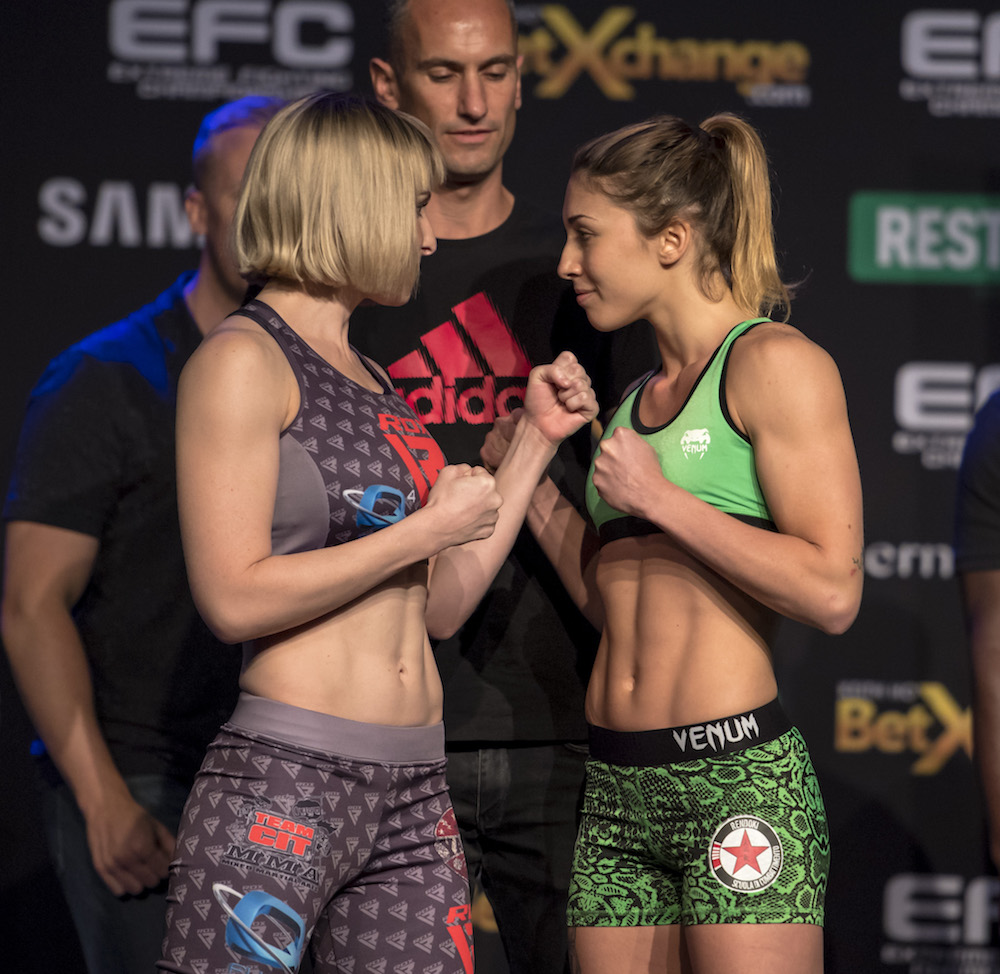 Eliasov and ‘Beasty Barbie’ Penco faced-off for the final time before they collide in the Hexagon. For only the second time in the organisation’s history, a women’s championship fight will headline a card.

“I have been waiting a long time for this,” said Eliasov. “It’s a massive moment for SA women’s MMA, it’s a massive opportunity.”

“I feel good and can’t wait for tomorrow night,” said Penco, relishing her first outing to compete outside of Italy. “I will fight until the end!”

In the co-main event, featherweight champion Igeu Kabesa takes on the dangerous Brazilian Paulo Silva, at a heavier lightweight. Kabesa was his typical animated and athletic self while Silva, who weighed-in a staggering 3kg’s over, hurled insults during their face-off

“I’m happy to be here,” said Silva, making his EFC debut tomorrow night. “I am going to beat the champion, and it will be easy.”

“He chose the wrong guy,” replied Kabesa, full of his trademark ‘smiley’ grin. “A change of opponent doesn’t change anything.”

The Netherlands’ undefeated Reinier de Ridder makes his EFC debut tomorrow. A renowned Brazilian Jiu Jitsu specialist, he towered over his opponent, Bloemfontein’s Warren Allison, in their face-off. Allison is no slouch on the ground, with most of his victories coming from submission.
Known as one of the most violent men in the organisation, Gordon Roodman faces former TF1 contestant and undefeated Mzwandile Hlongwa. While neither have been outwardly aggressive, fans can expect big action tomorrow.

Set to open the main card with lightning fast action, fan favourite, Bokang Masunyane will be hunting his fifth straight win, this time against England’s Coner Hignett. The two flyweights have been at each other’s throats with promises of an early finish since the fight was announced. Facing off, the enmity was intensified, with Masunyane openly goading the Englishman.

Paulo Siva and TC Khusu did not make weight, and will take financial penalties.

The official EFC 67 weights are: