THIRD TIMES THE CHARM FOR ‘THE PUNISHER’ 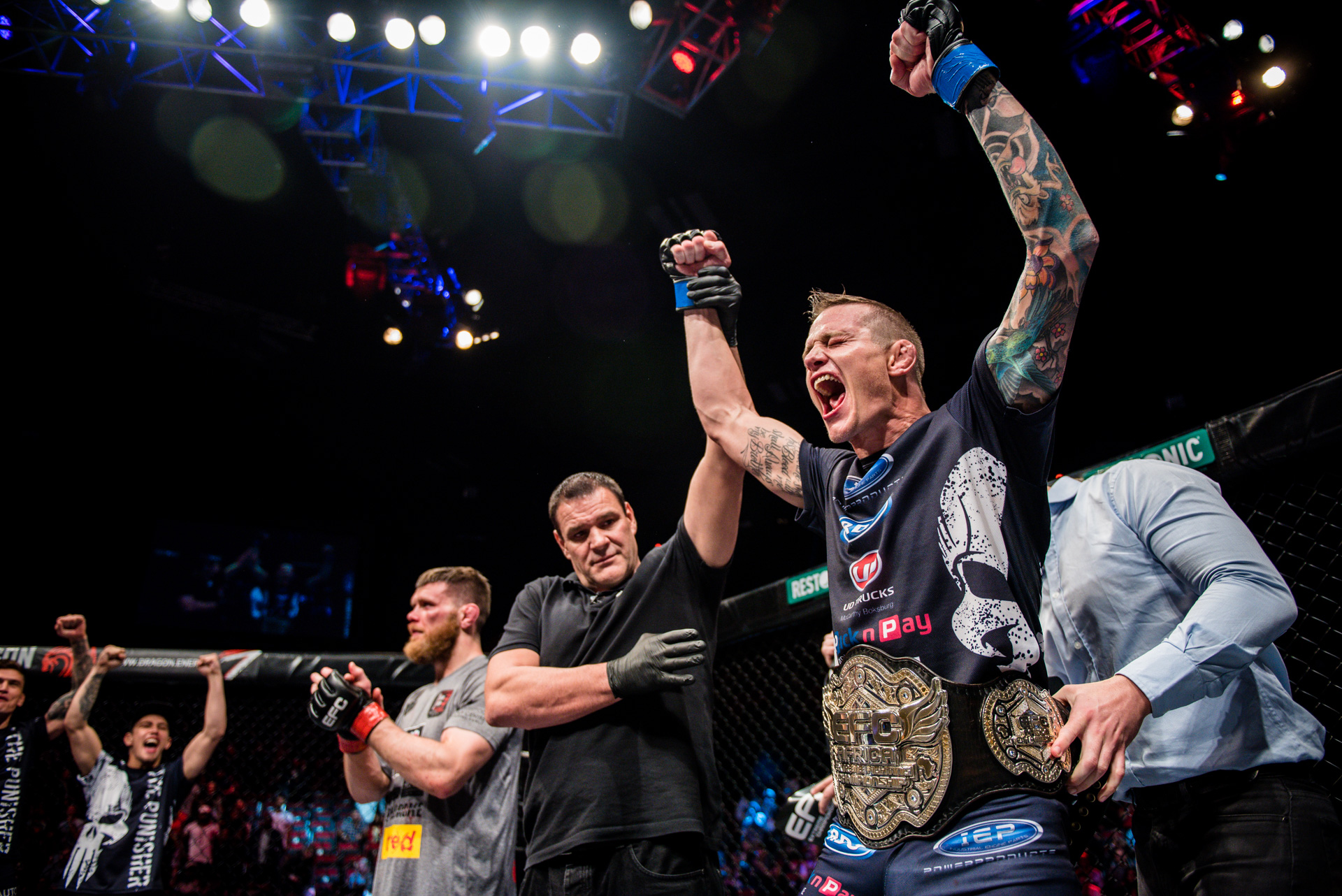 Cape Town, South Africa – EFC 68 delivered a massive night of fights at the GrandWest Grand Arena tonight. The event had an incredible 11 finishes out of 12 fights, and a new lightweight champion crowned with South Africa’s Martin Van Staden (19-9) taking the vacant title in his bout with England’s Gavin Hughes (9-1). In the co-main event, the USA’s Dave Mazany (16-7) bested South Africa’s Chris Bright (6-1), to take the spot of the division’s number one contender.

Martin van Staden entered the Hexagon for his third title fight, the weight of a legendary career still lacking a title on his shoulders. England’s Gavin Hughes was waiting for him, undefeated, and riding a nine fight win streak.

The first round was populated with brutal punches from both, Hughes landing the greater number, but van Staden penetrating with more precision. Hughes opted for a takedown against the fence, which backfired as van Staden sunk a guillotine that seemed deep, but Hughes defended.

Going into the second the score seemed even, and the heavy strike barrage continued, until van Staden forced a break with a knee flush on Hughes’ jaw, buckling the Englishman, and finishing the fight with thudding ground and pound.

In the co-main event, Chris Bright took the next step on a road to the title that has spanned the entire history of the EFC organisation, when he stepped into the Hexagon to face former lightweight champion, the USA’s Dave Mazany.

Bright looked dangerous in the first, surprising all with shots that rocked and dropped the American. But Mazany was unfazed, and continued to probe with pressure, testing the South African’s defense on the feet, and thwarting Bright’s renowned ground game with kicks from standing.

In the second Mazany’s experience showed, dropping Bright with a left hook and following up with lightning quick ground and pound. The onslaught convinced referee Kariaginidis, who called a stop to the bout.

Mazany goes to a two-fight win tear, and has carved his name to the top of the division.

Roedie Roets is a steadily growing name in the featherweight division, and tonight entered the professional arena for the fourth time, looking for a fourth straight win. Up against experienced campaigner Regis Muyambo, the task was a difficult one.

Roets brought relentless, wrestling based pressure that smothered a spirited Muyambo for three rounds. The Capetonian had flashes of control, but the bout was Roets’, going his way by unanimous decision.

South Africa’s Faeez Jacobs made his main card debut against England’s Cal Ellenor. The Capetonian had been pure fire in the build-up, promising a blizzard of a fight, and delivered by streaking into the bout at the buzzer.

Engaging the Englishman he immediately got the takedown and his opponent’s back, but his enthusiasm was also his inexperience. Ellenor absorbed the aggression, methodically worked for position, and took Jacobs’ back before forcing him into the fence. In the dying seconds of the first round he sunk a standing guillotine, to which Jacobs lost consciousness.

The Cape Town crowd, despite having had their hero slain, applauded the foreigner. Jacobs brought the fire, but Ellenor didn’t bat an eye and proved his supreme talent.

Cape Town’s rising star Gary Joshua opened the main card when he took on Durban’s Martin De Beer, a main card debut for Joshua. The bout began with clinical and fluid striking from both, neither gaining the ascendancy, until deep into the fourth minute when the fight went to ground, and Joshua forced a tap via heel hook.

Performance bonuses were awarded to Caleb Ridley, August Kayambala, Gary Joshua, and Juan Bezuidenhout. Fight of the Night was awarded to Chris Bright and Dave Mazany.

The official EFC 68 results are:

Martin van Staden defeated Gavin Hughes via KO (knee and punches) 0:20 into round 2, to take the EFC lightweight title.

Dave Mazany defeated Chris Bright via TKO (punches) 2:19 into round 2.

Luthando Biko defeated Warren Richards via TKO (strikes) 4:40 into round 1.

Torjbjøn Madsen defeated Bruno Mukulu via tapout (strikes) 2:03 into round 2.

Juan Bezuidenhout defeated Matunga Djikasa via tapout (armbar) 4:38 into round 2.

Justin Smith defeated Robo Ambamba via TKO (strikes) 3:13 into round 1.