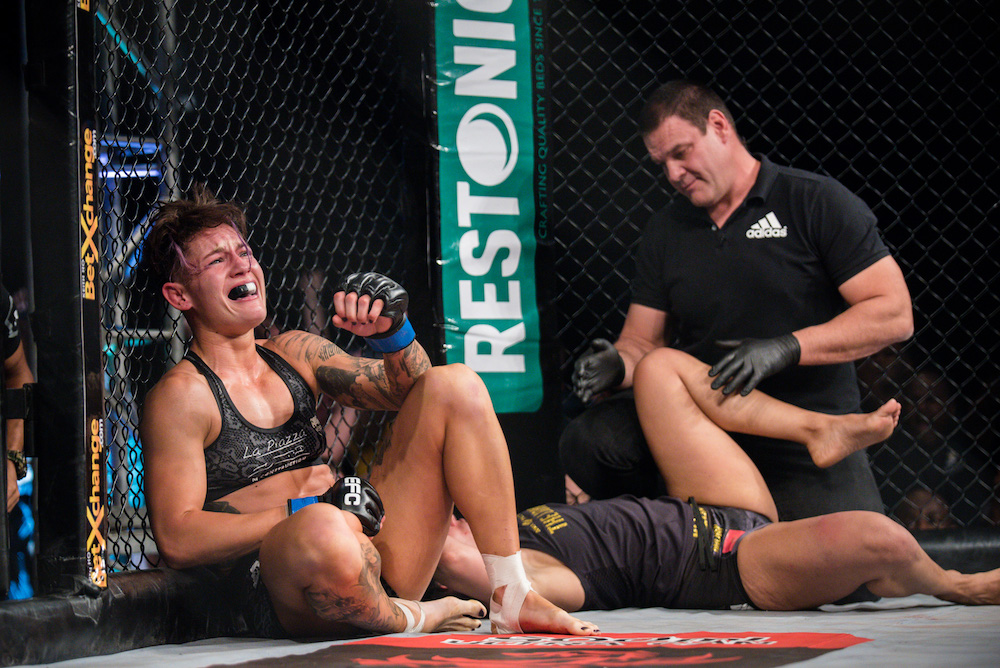 Their fight was unforgettable. In front of her home crowd, Lino stepped out in a weight class above her own, against an athlete with a over decade of Olympic level Judo competition behind her, and did so fearlessly.

Zouak immediately proved her pedigree with devastating hip throws, seemingly tossing Lino at will. But Zouak’s takedowns did not translate to top control, and time and time again Lino made her way back to her feet, as the Durban faithful roared her on.

Zouak’s technique and strength were immense. Over and over she threatened with deep armbars, but Lino simply refused to tap, and as round two began to draw to a close, so too did Zouak’s energy begin to ebb. She could not finish Lino, and at every opportunity, Lino would land crunching punches that collectively took their toll.

In the third, Lino once again weathered a hip toss, and this time escaped to back control, and then to rear mount. Throwing leather fists she pounded Zouak out, and as referree Wiekus Swart called the bout over, she collapsed in exhaustion and relief.

Crowned with two belts, Lino struck a mesmerising and meaningful picture. As an amatuer she took the world IMAAF title, and within EFC she became both the organisation and Africa’s first women’s champion. Tonight, broadcast live across the world, she wrote another chapter in the history of women’s MMA, and brought a new legion of fans to the sport. All hail the new queen.

Dr. Bunmi Ojewole faced Jacqualine Trosee in the evening’s penultimate bout. Ojewole is fresh off of a silver medal win at the UAEJJF world Brazilian Jiu Jitsu pro in Abu Dhabi, setting up a dynamic where it was crucial for Trosee to keep her distance. She was unable to do so, with Ojewole clinching immediately, scoring the takedown, and sinking a clinical Rear Naked Choke to end the fight early in the first round.

Durban’s Dansheel Moodley and Angola’s Josemar Octavio set a spectacular pace in the opening of their bout. Moodley was looking to trade strikes, but had no answer to a mesmerising array of takedowns possessed by the Angolan.

Octavio’s grappling skills were lacking, however, and Moodley was consistently able to fight his way out of danger and pressure Octavio with potential submissions.

The dynamic continued throughout a thrilling fight. Ultimately Moodley took the bout by unanimous decision, and proved himself to be an athlete developing into a serious contender.

Heavyweight warriors Ivan Strydom and Thabani Mndebela met in what was billed as a striker vs striker matchup. Former pro-boxer Strydom bucked the trend and closed the distance early, attempting an unsuccessful guillotine choke.

Both behemoths engaged with heavy strikes, Mndebela having particular success with body kicks, in a seemingly even war that had the crowd screaming. Deep into the first Mndebela trapped Strydom against the fence, and sank a guillotine to end the fight.

The night’s main card began with a classic hometown match-up, when fellow Durbanites Yusuf Hassan and Martin De Beer stepped into the Hexagon. The bout kicked off at a blistering pace, with Hassan dropping De Beer with a one-two punch combination, and swarming in to capitalize.

De Beer was down, but not out. He weathered the attack and over the course of the round fought his way to top position, finally finishing with a flurry of ground and pound tacked to an uncompromising rear naked choke.

Both men were coming off of a loss. For De Beer, re-entering the win column in front of his home crowd was extra sweet.

The prelim card bristled with action, Kasanda vs Singh and Mnikathi vs Ngcoba standing out as all-out wars. Kasanda showed a new level of grit in his three round battle, and Mnikathi in particular revealed an athlete stepping up to a new level of performance. No doubt he will be re-entering main card competition soon.

Performance bonuses were awarded to Sizwe Mnikathi, Sifiso Ngcobo, Serge Kasanda and Tyrel Singh. Fight of the Night was awarded to the women’s bantamweight title fight between Amanda Lino and Rizlen Zouak.

The official EFC 70 results are:

Quinton Rossouw defeated Steve Nwosu via tapout (strikes) 1:20 into round 2.

August Kayambala defeated Warren King via tapout (Heelhook) 2:46 into round 1.

Mzwandile Hlongwa defeated Robert Swanepoel via TKO (strikes) 1:29 into round 1.

All eyes now turn to EFC 71 Van Zyl vs Lungiambula, Zulu vs Masunyane is presented by Betxchange.com and takes place on Saturday 23 June live from Carnival City, Johannesburg. Tickets are on sale at computicket.com, and the 5 main card bouts will be broadcast live on Kwesé Free Sports 1 (Kenya & Rwanda), Kwese TV (Sub-Saharan Africa) and live in South Africa on SABC 3 starting at 21:30 (CAT). Full broadcast details available on efcworldwide.com. Prelim fights will be available for free on the official EFC Facebook page.