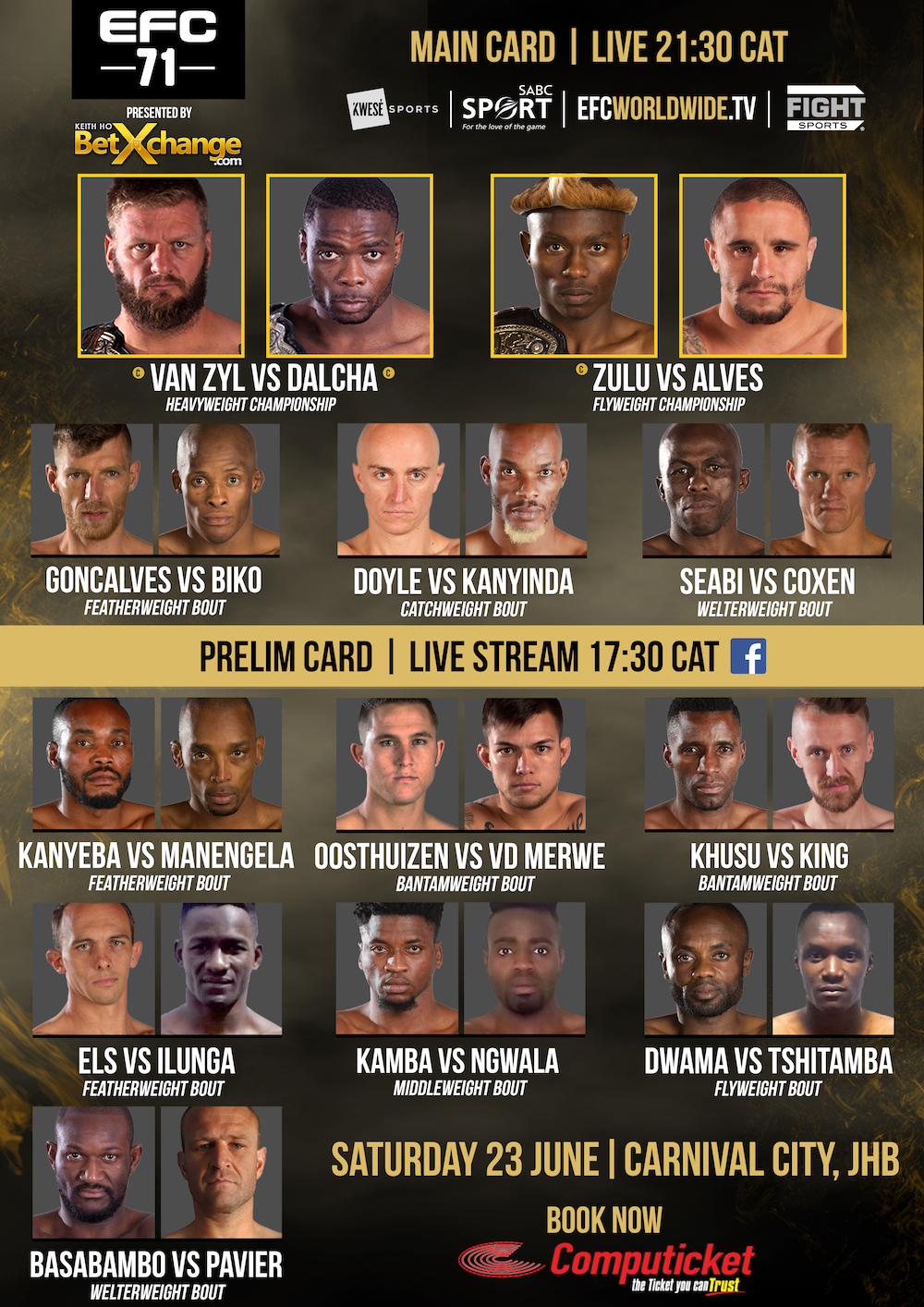 Bokang Masunyane has officially been removed from the EFC 71 fight card. This week the contender reported to EFC that he had an injury preventing him from competing against Nkazimulu Zulu, but was requested to be checked out by the EFC medical team before an official decision was made. Article here: https://efcww.com/2HQosxT

The change of opponent is official. Brazil’s Magno Alves will challenge Nkazimulo Zulu for the EFC flyweight world championship at EFC 71 on 23 June at Carnival City.

Graeme Cartmell, VP of Talent explains, “Since yesterday, I have spoken with BK extensively and his medical issues and situation has been explained more clearly. Although, at this stage he still has not seen the EFC medical team, we have decided to move forward and take him off the card, this will give the new challenger, Magno Alves, and the champion Nkazimulo Zulu the most time possible to prepare”.

When asked for his opinion on BK’s injury, Zulu stated, “They all scared, there is nothing wrong with BK. Why did he refuse to go for a second opinion?”

Zulu added, “Thanks Magno for taking the fight. It is gonna be a great one. But it is still gonna end in a KO for you.”

“I apologise for the radio silence on my part, there was a lot going on,” explained Masunayne, “Unfortunately I am unable to compete and this is such a big fight I could never do it if I am not one-hundred percent. Sorry to my fans. Thanks Graeme and the rest of EFC for understanding. Best of luck to Magno and Zulu, I’ll be watching closely.”

Alves now steps up to the opportunity of a lifetime to face Zulu in a five-round title fight. Fighting out of Rio de Janeiro under the Team Nogueira flag, he bolsters an amalgamation of powerful boxing, world class Brazilian Jiu Jitsu and incredible strength and endurance at flyweight. A definite threat to everyone who stands opposite him in the Hexagon.

“Magno is a beast, he fought BK on short notice and took him the distance. He is the only man willing man to step in on several days’ notice and you know he is going to put on a show.” Cartmell concluded.